The New DailyFX Third Quarter Forecasts are now live including a fresh look at GBP.

The UK Parliament will vote on the recent Customs Bill on Monday and Tuesday and any defeat for the government is likely to fuel renewed talk about a leadership challenge to UK PM Theresa May. Last week’s Brexit White Paper was seen by many arch-Brexiteers as a sell-out to the EU and many will be looking at the two votes this week as a way of showing their displeasure. And while PM May could survive early in the week, the EU will also be looking at the proposal and giving their views on it later in the week.

On Tuesday and Wednesday, the Office for National Statistics will release the latest UK inflation, jobs and wages data. Recent economic releases have pointed to a slightly better-than-expected backdrop and fueled thoughts of a 0.25% rate hike at the next MPC meeting on August 2. Also, early Tuesday the Bank of England’s Carney, Cunliffe and Stheeman will present the Financial Stability Report to the Treasury Select Committee.

GBPUSD has picked up from last week’s low as the greenback edges back from its recent multi-month highs. GBPUSD traders should also be aware that Fed Chair Jerome Powell will delivers his semi-annual testimony before the Senate Panel on Tuesday and will also appear before the House Panel on Wednesday. Cable currently trades around 1.32750 and may have a volatile next few days as Brexit and hard data clash. 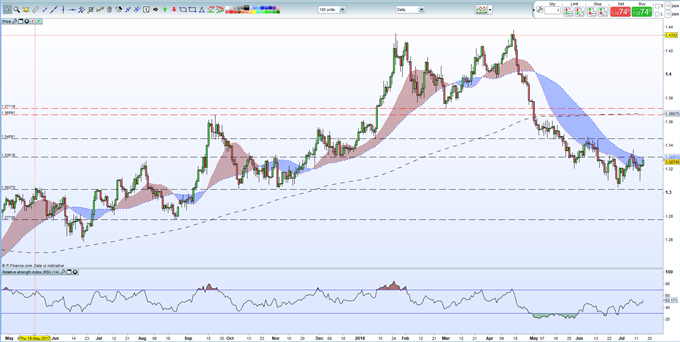 IG Sentiment Datashow 67.4% of traders are net-long GBPUSD with the ratio of traders long to short at 2.06 to 1. In fact, traders have remained net-long since Apr 20 when GBPUSD traded near 1.40897; price has moved 6.1% lower since then

If you missed this webinar and would like to know about future events, you can see the full DailyFX webinar schedule here.