The main focus for NZD traders will be the inflation data for Q2 scheduled at 2245GMT, in which the quarterly reading is expected at 0.5%, marking a rise of 1.6% (Prev. 1.1%) for the year. Near term inflation outlook has firmed notably amid the fall in the New Zealand, which had declined over 7% during the second quarter, while at the same time, crude oil has risen sharply (over 16%) with prices hovering around 3yr highs. However, this will unlikely detract the RBNZ from its cautious stance as underlying inflation continues to remain subdued.

Extreme short positioning as noted by the CFTC suggests that NZDUSD is vulnerable to a short squeeze in response to an upside surprise in the NZ CPI report. NZD net shorts equate to $1.8bln, which marks the largest since April 2017. However, if indeed the CPI data did disappoint expectations, then given the current positioning, downside may be limited in the short term. 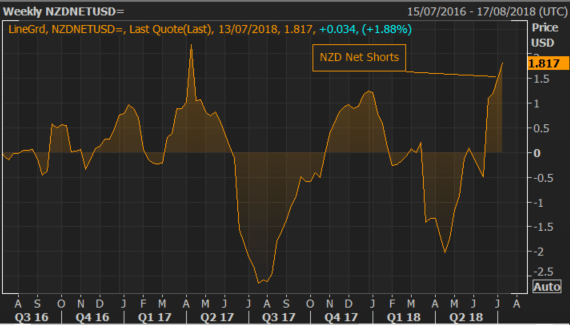 Support is situated at the July lows at 66.88, while a break below could place the pair on course for the 65 handle. On the upside, the initial target is at the 20DMA which coincides with the psychological 68.00 level.

According to IG Client Sentiment, positioning is more net-long than yesterday but less net-long from last week. The combination of current sentiment and recent changes gives us a further mixed NZDUSD trading bias.