This was done via five separate WTO dispute actions. US Trade Representative Robert Lighthizer said that the country would take ‘all necessary actions’ to protect US interests. In response, an EU Commission spokesman said that the bloc’s decision to retaliate was proportionate and WTO-compatible. Canada mentioned that its responses to US levies on metal are allowed under the rules of the WTO and NAFTA.

Around the same time, the IMF released its most recent world economic outlook. It mentioned that trade tensions pose the biggest risk to near-term world growth, adding that asset prices face a sudden repricing if growth and profits ebb. IMF’s Chief Economist Maurice Obstfeld then spoke and mentioned that the short-term balance of risks have shifted further to the downside.

Additional Comments From the IMF:

In the end, the US Dollar finished Monday’s session little changed. Much of the same could be said for the sentiment-linked Australian and New Zealand Dollars. Though they pared gains during the second half of the day as equities followed crude oil prices lower. Oil’s decline was attributed to reports that US President Donald Trump could tap into emergency stockpiles.

The New Zealand Dollar showed a volatile response to a miss in local second quarter GDP data. New Zealand’s headline inflation rate clocked in at 1.5% y/y versus 1.6% expected and 1.1% in the first quarter. Quarter-over-quarter, CPI was 0.4% against 0.5% expected. Initially, NZD/USD fell but it then quickly pared its losses and was heading higher.

New Zealand front-end government bond yields were relatively stable amidst the data release, suggesting the data had a limited impact on RBNZ monetary policy bets. Keep in mind that the central bank envisions its next move as having an equal chance of either a rate hike or cut. Perhaps CPI now being in the middle of the central bank’s target band (1 – 3%) makes the latter less likely.

Ahead, Asian stocks may echo some weakness seen in US ones. On the flipside, a lack of updates in regards to the US/China tariff situation could also open the door for some consolidation. Whichever the direction, the anti-risk Japanese Yen will likely inversely follow. Meanwhile, the Australian Dollar looks to the next set of RBA meeting minutes. 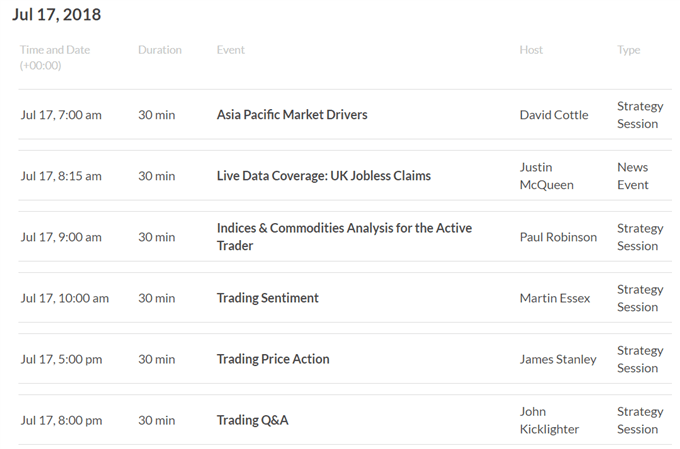 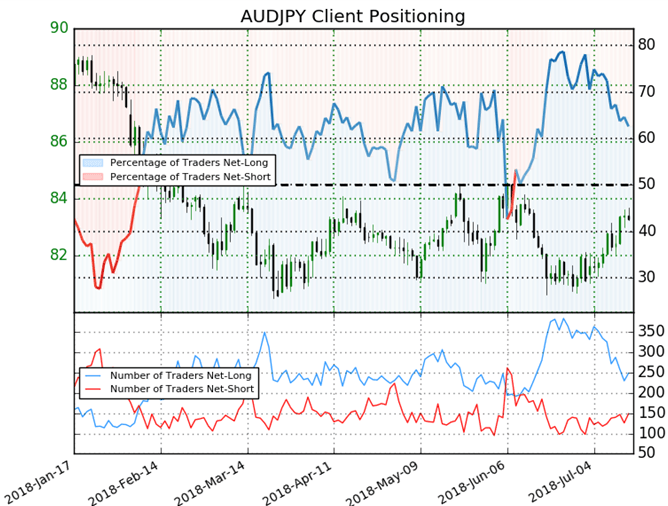 Retail trader data shows 62.6% of AUD/JPY traders are net-long with the ratio of traders long to short at 1.67 to 1. In fact, traders have remained net-long since Jun 14 when AUD/JPY traded near 83.077; price has moved 0.2% higher since then. The number of traders net-long is unchanged than yesterday and 31.8% lower from last week, while the number of traders net-short is 18.3% higher than yesterday and 31.9% higher from last week.