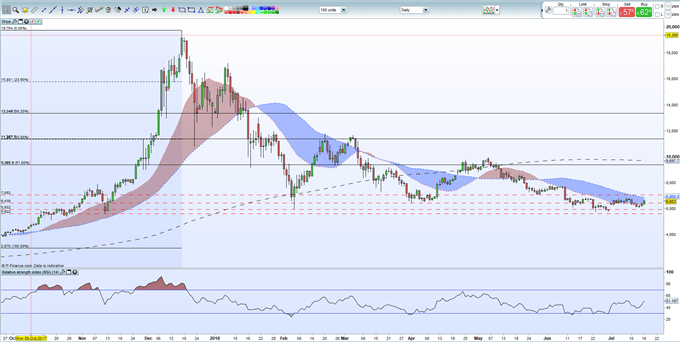 The cryptocurrency market added $10-$12 billion to its market capitalization Monday morning after a report hit the wires that the world’s largest asset manager, BlackRock ($6.3 trillion AUM) are setting up a department to study and analyse blockchain and cryptocurrencies. The story, citing ‘two people familiar with the matter’ was first reported in Financial News and says that the asset manager is looking at Bitcoin futures, causing the largest cryptocurrency token to jump sharply. BlackRock’s interest follows reports that billionaire hedge fund manager Steve Cohen recently invested in cryptocurrency investment fund, Autonomous Partners. BlackRock have not commented on the story.

Today’s move higher has seen BTC move back into the top half of its one-month trading and eyeing $7,000 for the first time since June 10. The RSI indicator is also pointing higher, while 24-hour volume is just under $5 billion. Earlier today, BTC was nudged higher after news over the weekend that US digital currency exchange Coinbase was considering adding another five altcoins to its platform.

IG Client Sentiment Datashow 76.8% of traders are net-long BTC with the ratio of traders long to short at 3.3 to 1. The percentage of traders net-long is now its highest since Jul 04 when Bitcoin traded near 6563.32.

We will look at Bitcoin, and other cryptocurrencies, at our Weekly Cryptocurrency Webinar on Wednesday.

What’s your opinion on Bitcoin? Share your thoughts and ideas with us using the comments section at the end of the article or you can contact me on Twitter @nickcawley1 or via email at nicholas.cawley@ig.com.