May Asian bourses were firmer Friday although as their strength came reportedly on little more than investor relief that trade tensions had not escalated overnight, their gains can probably be described as vulnerable.

Global markets were hit earlier in the week after the Trump Administration published a list of Chinese goods it might want to hit with a 10% tariff. However the absence of more such moved and a measured response from China has given some of them room to rise again.

The Nikkei 225 was up 2% as its close loomed, with stocks in Hong Kong and Seoul also higher. Shanghai and Sydney mainboards both slipped into the red, but not by very much.

The foreign exchange session was on the torpid side, with the Australian Dollar reacting very little to news of another broad Chinese trade surplus which, on the faith of it, seems likely to keep the rhetoric from Washington highly charged even though both exports and imports missed expectations. The US Dollar continued to forge higher against the Japanese Yen, with some commentators suggesting that the buying of US stocks by Japanese pension funds could be behind some of its strength.

In any case the pair remains very solidly within its dominant uptrend channel, although recent gains have been quite sharp. Longer-term US Dollar bulls may well be hoping for some consolidation before USD/JPY makes a serious attempt at 2018’s nearby highs. 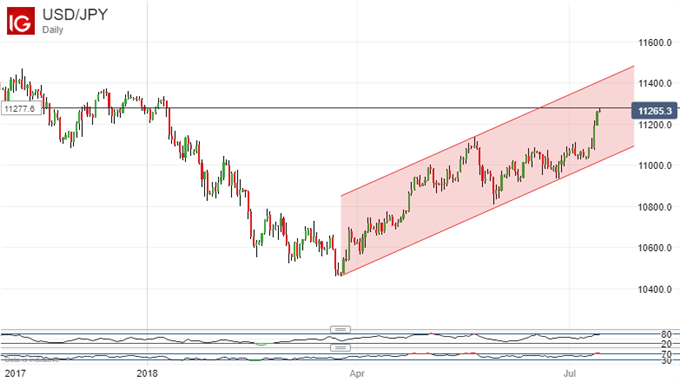 Gold prices were somewhat subdued by the sight of a little more US Dollar strength, and not just against the Japanese Yen. Crude oil prices were mixed but look set for a week of falls.

There is a decidedly US focus to the rest of Friday’s economic numbers. The Federal Reserve will release its monetary policy report to Congress and import price data are due, along with the University of Michigan’s venerable consumer sentiment snapshot.