Find out what retail traders’ Australian Dollar and equities buy and sell decisions say about the coming price trends!

Asian benchmark indexes edged higher by Thursday afternoon trade after yesterday’s selloff where the US released its list of additional $200b in Chinese import tariffs. The markets took a breather as prospects of possible negotiations between the world’s largest economies cooled worries of what could be more retaliation. Reports from senior Chinese and US officials hinted that talks might be restarted ahead.

Meanwhile in the FX spectrum, it was no surprise to see the anti-risk Japanese Yen weaker across the board. Sentiment-linked currencies like the Australian Dollar rose, though it saw some temporary weakness as local consumer inflation expectations softened. AUD/NZD climbed as government bond yields rose in Australia relatively to New Zealand.

Ahead, during Thursday’s US trading session, we will get local CPI data. There, both the headline and core rate is anticipated to edge up. Signs of rising price pressures will complement the Fed’s outlook for what could be two more rate hikes this year, perhaps bolstering the US Dollar. We may get such a result as economic data out of this country has been tending to outperform relative to economists’ expectations lately.

AUD/USD Technical Analysis: May 2017 Low Next?

On a daily chart, the Australian Dollar is now on the defensive against its US counterpart after breaking above a near-term resistance line (purple dotted line on chart below). AUD/USD appears to be heading lower after setting a new high in July at 0.7481. From here, the pair faces the May 2017 low around 0.7330 which is followed by the July 2nd low at 0.7311 next as support. 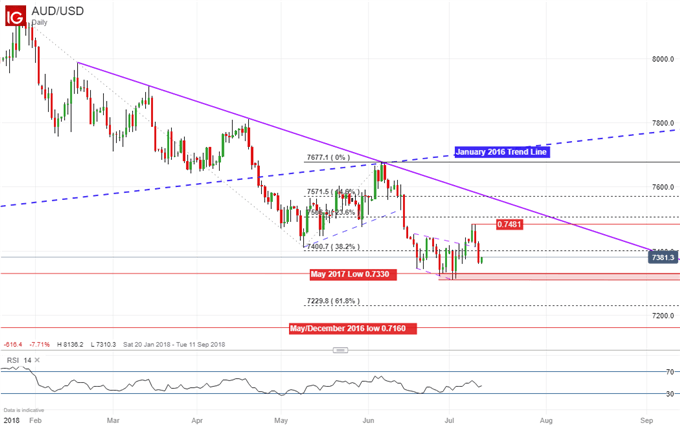