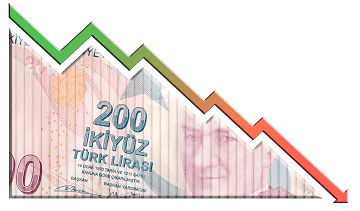 Turkish Lira on the Brink of a Full-Scale Currency Crisis

At the beginning of the week, President Erdogan’s executive presidential system came into effect, the President wasted no time in utilising his new powers. Firstly, Erdogan changed the Turkish Central Bank law, allowing him to appoint who he wants as deputy governors without the consent of the governor. Most notably Erdogan appointed his son-in-law as the new finance minister and removed the market friendly, Simsek and Al Babacan which prompted the initial sell-off in the Turkish Lira as Erdogan tightens his control over crucial policy areas.

Given that President Erdogan is moving towards increasing control over key policy areas, this has raised the risk that Erdogan will allow for unorthodox policies to be implemented, which would involve lowering inflation by lowering interest rates. Subsequently, as inflation is expected to pick amid the free-fall in the Turkish Lira, cutting interest rates will also likely lead to further selling in the currency and thus failing to curb the rising inflation. As such, this suggests that Turkey is potentially heading into a currency crisis, unless central bank authorities are able to intervene.

RESOURCES TO HELP YOU TRADE THE FOREX MARKETS