Japanese Yen Technical Analysis: Will Previous Peak Prove Too Much?

The Japanese Yen backdrop remains one of severe pressure against the US Dollar, but, all the same, USD/JPY bull seem to be running out of puff.

The pair’s latest rise looks to be faltering just short of the previous significant high. That was the 111.41 intraday peak, scaled on May 21. That level was almost reached once again on Tuesday but the Dollar closed below it on the day. 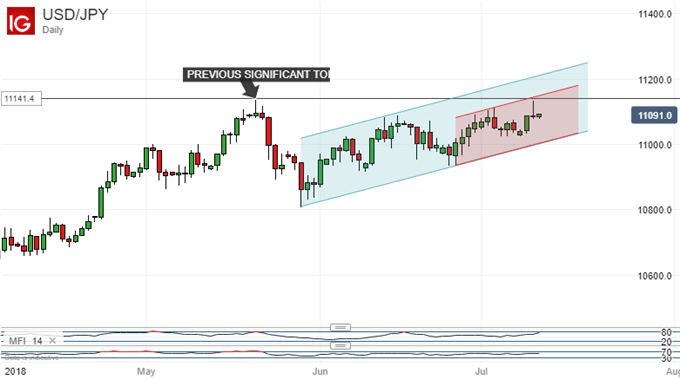 Of course, that wasn’t long ago and the bulls may yet gird themselves for another try.

However, as you can see from the daily chart above, upper bounds of the (blue) uptrend channel dominant since May 29 haven’t been tested for some time now. Indeed the shorter, newer, red channel may be of more immediate relevance. Daily and weekly closes within it this week will start to look like a failed upside test which may then put focus on the lower bound which, at the moment, comes in around 110.06.

Below that, support will probably be quite firm at 109.79. That is where the first, 23.6% Fibonacci retracement of the rise up from those late-March lows to the recent peak comes in. 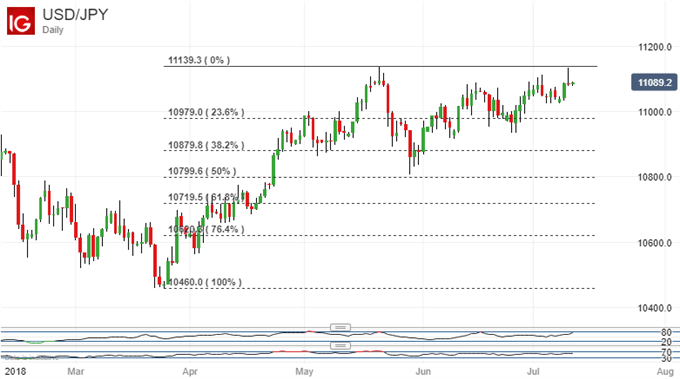 Still, as long as that channel base holds it’s probably worth playing cautiously for more upside. The fundamental picture puts the US Dollar unquestionably in charge on an interest-rate differential basis, and even if events allow the markets to forget that fact intermittently it is always very likely to reassert itself over time.

Meanwhile EUR/JPY has found support firm in a band between 126.74 and 128.84 in the past couple of weeks. A bounce in that region has seen the uptrend from May 29 endure. That now provides probable support in the 128.20 area.