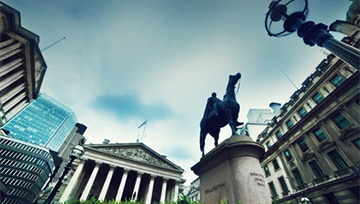 GBPUSD In Focus Ahead of Keynote Speech by Carney

Bank of England Governor Mark Carney is scheduled to give the keynote address at a US National Bureau of Economic Research Summer Institute session on the global financial crisis in Cambridge, Massachusetts at 1535 GMT today, and markets will be looking for guidance on whether the Bank’s monetary policy committee will raise interest rates when it next meets on August 2.

Market pricing currently suggests a 60% probability that the MPC will hike rates to 0.75% from 0.5% at the meeting, which will coincide with the publication of the Bank’s quarterly Inflation Report, making it a “live” meeting as far as rates are concerned. If that probability increases, GBPUSD will likely gain ground after a period of relative stability.

GBPUSD is currently being battered by political turmoil in the UK over Brexit, which has seen two senior ministers resign and talk of moves to oust Prime Minister Theresa May. However, her position seems safe for now, her latest Brexit proposals have been described as “a whole step forward” by German Chancellor Angela Merkel and much of the Brexit turbulence has already been priced in to the exchange rate.

Moreover, data released Tuesday showed the UK economy bouncing back modestly in May, expanding by 0.3% after a boost from warm weather and the royal wedding of Prince Harry and Meghan Markle. This has put a rate rise firmly on the table, improving the outlook for the British Pound.