The Australian Dollar was unable to capitalize on improving local consumer sentiment data, weighed down by a resumption in trade war headlines. In July, Westpac Consumer Confidence rose 3.9% m/m which was the fastest increase since May 2016. Meanwhile, the index clocked in at 106.1 from 102.1 in June. That was the highest outcome since November 2013.

So amidst the ever increasingly tense global trade front as the world’s largest economy pursues implementing tariffs on major economies, Aussies seem to be keeping their hopes up. This could be in-part due to that the country is exempt from the US metal tariffs. Improved local investment lending and home loan data an hour later also failed to offer much Aussie upside momentum.

These statistics have minimal implications for Reserve Bank of Australia monetary policy bets. The central bank remains patient and the markets are not pricing in a rate hike in the near-term. In the meantime, the sentiment-linked currency was under pressure as the US released the additional $200b in Chinese import tariffs.

Asia/Pacific shares fell, with the Nikkei 225 and ASX 200 down about 1.75% and 0.60% respectively. The anti-risk Japanese Yen headed higher, but USD/JPY still remains stuck in a resistance channel after breaking above a long-term descending trend line from December 2017. The Chinese Yuan also depreciated but keep in mind that the PBOC could continue taking measures to keep its currency stable.

Ahead, sentiment-linked currencies like the Australian and New Zealand Dollars could be vulnerable to Chinese retorts. Reports did cross the wires during Asia AM trade from a PBOC adviser that China is going to consider countermeasures. Outside of this region, this week’s NATO Summit could also continue adding fuel to the deterioration in risk trends as Trump could face a united rebuke against his policies. 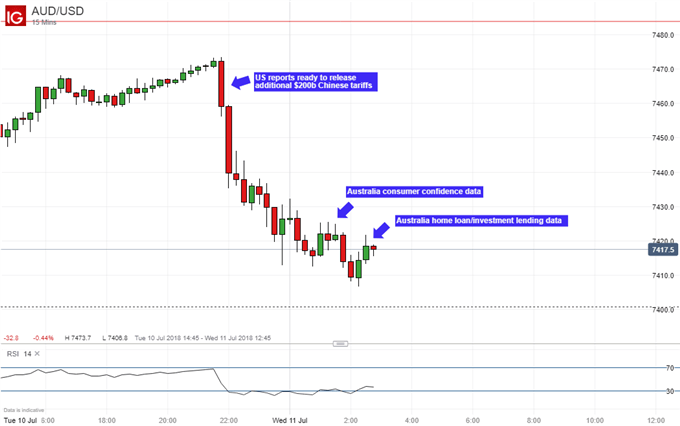 On a daily chart, AUD/USD prices pushed higher recently as anticipated as positive RSI divergence signaled ebbing momentum to the downside. The pair was able to push above a narrow descending channel but it stopped just short of the 23.6% Fibonacci retracement at 0.7506, with the most recent high at 0.7481. From here, near-term support is the 38.2% level around 0.7400 followed by the May 2017 low around 0.7330. A push above resistance though will expose a rather persistent descending trend line from February. 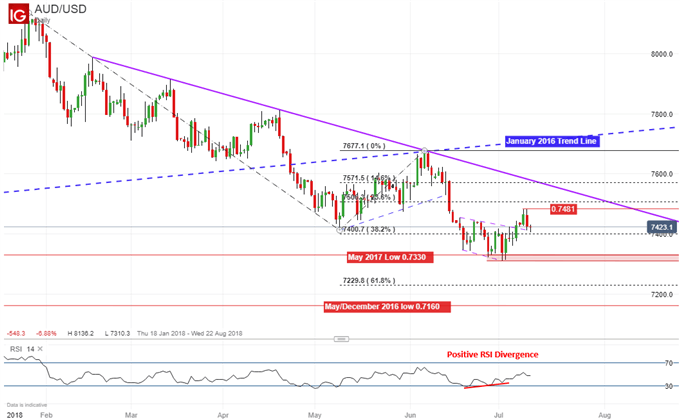