Find out what retail traders’ Yen and equities buy and sell decisions say about the coming price trend!

Most Asian benchmark indexes advanced, as expected, following broad gains in stocks from around the world on Monday. There, sentiment improved as a lack of updates on the US/China trade war front allowed for uninterrupted gains. UK stocks advanced as Brexit uncertainty lowered the prospects of Bank of England rate hike bets, which could perhaps result in looser credit conditions for longer.

In Japan, the Nikkei 225 advanced more than three quarters of a percent by Tuesday afternoon trade, South Korea’s KOSPI also edged higher but not by as much (+0.40%). Shares were more mixed in China and Australia. In the former, the Shanghai Composite was little changed. In the latter, the ASX 200 was weighed down by financials. In particular, by the Commonwealth Bank of Australia (-2.0%).

On the currency side of things, the anti-risk Japanese Yen saw few demand as traders focused on seeking returns. Meanwhile, the sentiment-linked Australian and New Zealand Dollars appreciated at its expense. The former saw some of its progress to the upside cut amidst weaker local retail confidence. The latter experienced some volatility after better-than-expected New Zealand credit card spending data.

The British Pound also continued heading lower into the European session, echoing weakness from earlier when UK Foreign Secretary Boris Johnson resigned. Ahead, Sterling could struggle finding any sort of momentum on local trade, industrial production and manufacturing data so long as the weight of political uncertainty rests on its shoulders. This could be exacerbated if Prime Minister Theresa May ends up facing a no confidence vote after outlining a vision of ‘soft Brexit’ towards the end of last week.

Meanwhile, the Euro looks to German and Eurozone economic sentiment surveys. Data out of the nation bloc is still tending to underperform relative to economists’ expectations. This once again opens the door for a downside surprise here, potentially hurting EUR as ECB 2019 rate hike bets get pushed further out. A lack of updates to any US/China trade war developments can also allow equities to continue gaining.

USD/JPY appears to be stuck in a resistance channel as it tries pushing above a descending trend line from December 2017. If the pair manages to hold on to its rise seen during Tuesday’s Asian trading session, we could be heading for its highest daily close since mid-January. This will also open the door to more gains ahead as USD/JPY faces the highs set back in May around 111.42. On the other hand, near-term support appears to be 110.29 or the lows achieved earlier this month. 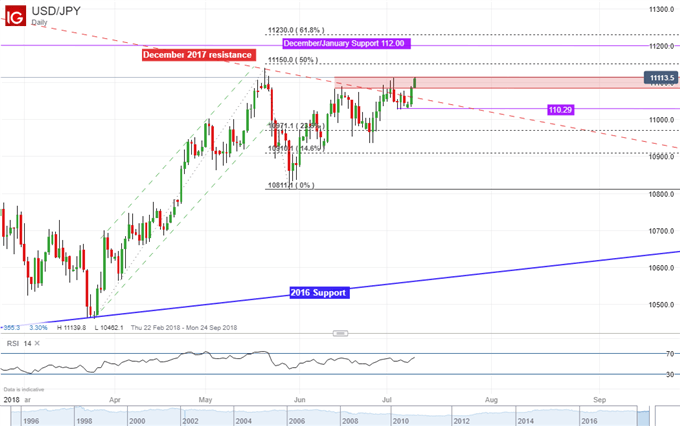