With financial markets still very much focused on the current trade spat between the US and China, it was perhaps unsurprising that the Japanese Yen didn’t move very far on Monday when that country’s own trade balance data were released.

On a balance of payments basis, the trade deficit was JPY303.9 billion (US$2.7 billion) in May. That was well below the previous JPY573.8 billion surplus and the expected surplus of JPY483. 1 billion. Still, this series can be volatile and, in any case, signs of increasing imports may cheer Yen bulls.

The overall current account balance came in at JPY1,938.3 billion, way ahead of expectations, which centered on a JPY1,266 billion surplus. Bank lending also increased a little faster than its February pace, rising 2.1% in May.

The numbers had very little impact on the Yen, which actually weakened a little against the US Dollar in the immediate aftermath. The markets may be awaiting Bank of Japan Governor Kuroda. He is due to make a speech on Monday and, with inflation still apparently very reluctant to rise, despite massive stimulus aimed at making it do so, his comments will be keenly awaited. 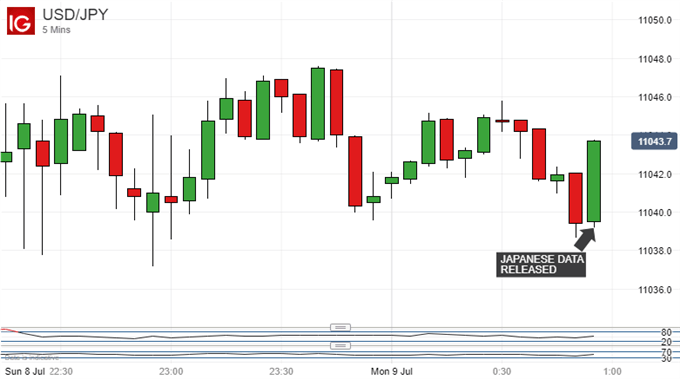 The clear uptrend channel on USD/JPY’s remains in full view but the move’s momentum seems to be waning. The pair’s most recent upward foray fell short of both its most recent significant peak, made on June 15, and May 21’s top of 111.42. Still, Fibonacci retracement support at 109.85 looks solid enough and is, in any case, some way above the upside channel base. Dollar bulls are still in command then, but they will need to show that they know what to do with it soon. 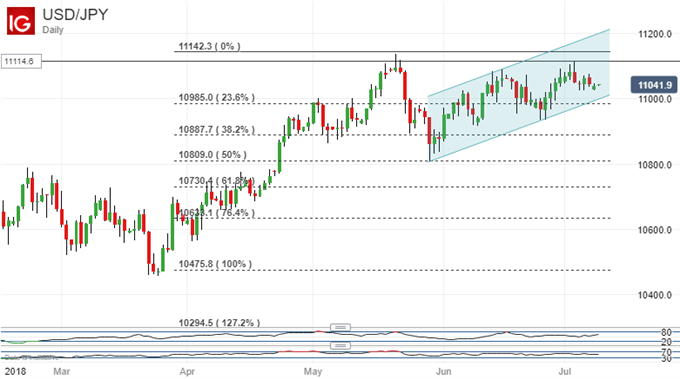