Asia Stocks Drop as US Tariffs on China Due, Nikkei 225 May Fall

Asian benchmark indexes declined by Thursday afternoon trade. The US Independence Day holiday made for some illiquid trading conditions as updates from China on the global trade front soured sentiment. China’s Commerce Ministry Spokesman Gao Feng spoke and said that the country will have to fight back if the US imposes tariffs on them.

Keep in mind that this Friday marks the day the world’s largest economy will begin imposing the first part of its planned $50b in Chinese import tariffs. That will amount to roughly $34b. Given that the impacted country is poised to retaliate at this point if the US follows through, all hopes for an agreement seem to be lost as risk trends took a turn for the worst.

Japan’s Nikkei 225 was down almost one percent; in fact it was heading for its longest daily losing streak since November 2017. Chinese shares also took a beating with the Shanghai Composite down more than 1.10%. South Korea’s KOSPI fell more than 0.75%. Things were looking better in Australia with the ASX 200 was up 0.53%, carried by financials.

On the currency side of things, the anti-risk Japanese Yen edged cautiously higher. Also heading up but not by as much was the US Dollar, which also has haven status due to it being the world’s reserve currency. Meanwhile, the sentiment-linked Australian Dollar declined.

In the Philippines, headline inflation clocked in at 5.2% y/y versus 4.8% expected. This was outside of the highest case scenario estimate from the central bank. Following the data, Governor Nestor Espenilla said that the result was a setback and that they will have to update their anticipated inflation path. There may be some PHP gains ahead if the central bank has to rethink not raising rates.

Ahead, illiquidity should slowly come back in the FX markets as the US returns from its market holiday. Given the declines in stocks today and yesterday, there may be scope for some greenback gains into the end of the week that it missed out on. In addition, the US Dollar will look to the FOMC meeting minutes which may bolster the currency given the hawkish Fed interest rate announcement from last month.

On a daily chart, the Nikkei 225 is heading lower after breaking below a range of support around the 22,000 area. Heading into this decline, negative RSI divergence warned that upside momentum was ebbing as a double top formed. Now, the index could be heading for lows last seen in March. From here, near-term support is the 61.8% Fibonacci retracement at 21,344. 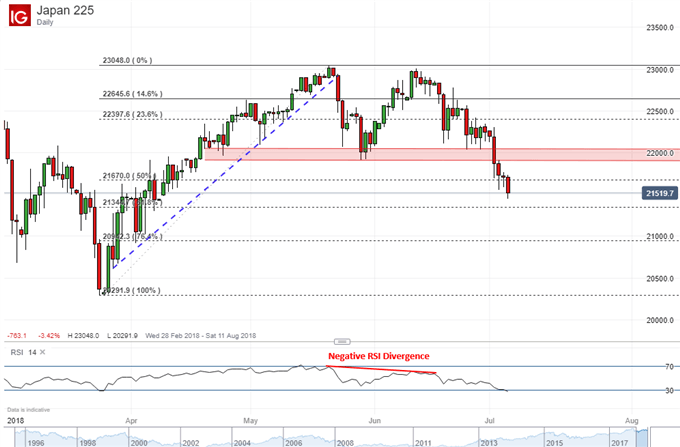