The Japanese Yen is still under broad pressure against the US Dollar, but USD/JPY still shows marked reluctance to push on from its recent highs. 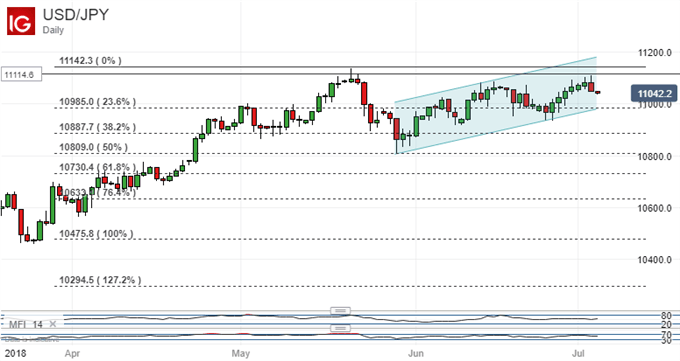 The pair seems to be topping out once more in the 111.14 region, which is just about where the previous run higher lost steam back in mid-June. It is also just below the most significant recent top- that was late May’s 111.42

This area is clearly a significant barrier for the bulls but, by the same token, USD/JPY remains quite firmly within the well-validated uptrend channel which has contained trade since May 29 and is itself merely an extension of the much longer uptrend which has been in place since March 22.

Obviously, something has to give here but, while the channel holds, the bulls must still have reason to be hopeful. Its lower bound remains quite comfortably below the market at 109.80, too. That’s a point which, interestingly, coincides with the fist, 23.6% Fibonacci retracement of that climb up from the lows of March. It has contained the bears’ enthusiasm for some weeks now too. The last downward foray stalled in that area.

If that support continues to hold then it’s reasonable to suspect that USD/JPY will have another crack at its recent highs in due course.

Should it give way, however, then the picture would turn more Dollar-negative with focus then on the 38.2% retracement which comes in at 108.88.

Meanwhile, the Australian Dollar seems to have been weakened further fundamentally by the still-yawning interest rate differential between its home nation and the US. It has also been hit by trade-spat headlines which tend to weaken the risk appetite which often supports the currency. AUD/USD weakness has been mirrored to some extent by AUD/JPY, although support at early April’s lows is holding for now.

Should it fail then the cross could be looking at a return to the lows of November 2016 in the 76.78 area.