During illiquid trading conditions given the US Independence Day holiday, the Euro suddenly spiked higher against its major counterparts. Around 16:20 GMT, reports crossed the wires that some ECB members are seeing a rate hike around the end of 2019 as ‘too late’. In the aftermath of this development, EUR/USD managed to nearly pare most of its losses when the US Dollar gained as expected.

To give a little bit of context, back in June the European Central Banksent the Euro tumbling despite confirmation of its QE programme coming to an end by the end of this year. What really drove the currency lower was President Mario Draghi’s patience in terms of waiting to raise rates thereafter. This was reiterated at an ECB Forum in Portugal on June 19th.

With that said, any signs to the contrary are likely to have bullish impacts on the Euro. In fact, German front-end government bond yields rose as today’s update crossed the wires. This indicates increasing hawkish ECB monetary policy expectations. Some ECB members were also said today to be a bit uneasy that September/October 2019 policy bets are underpriced.

Going forward, it will be imperative to follow commentary from the European Central Bank to gauge how much follow through there could be had here. In fact, on Thursday we will get commentary from ECB Executive Board Member Yves Mersch. Signs that he favors policy tightening sooner can add fuel to the Euro’s rise and vice versa.

However, do keep in mind that these bets can be quickly struck down by President Mario Draghi. Also back in June, he said that the end to their bond buying program is subject to incoming economic data. With that in mind, it seems that their timing of a rate hike will largely depend on that. Keep in mind that generally speaking, economic data out of the Eurozone is still tending to underperform relative to economists’ expectations. 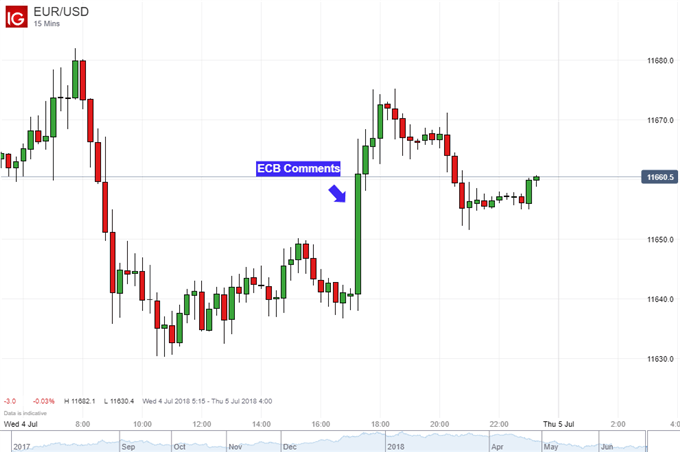 Looking at a daily chart, EUR/USD continues consolidating in a familiar range since last month’s ECB monetary policy announcement. It is confined by resistance which is around 1.1718 (November/December 2017 lows) and support at 1.1507 which is also the 38.2% Fibonacci extension.

However, downside momentum is ebbing as indicated by RSI which shows positive divergence. This warns that there may be a push higher ahead if not more consolidation. As always, a break above resistance will require confirmation to argue that the pair may reverse its downtrend which began in mid-April.

Immediately above resistance though is a range where the pair was unable to push above in early June. The outer boundary of this area is the June 14th high at 1.1852. Getting above that opens the door for a lasting reversal. Meanwhile, a break below support exposes the 50% midpoint of the extension at 1.1400. 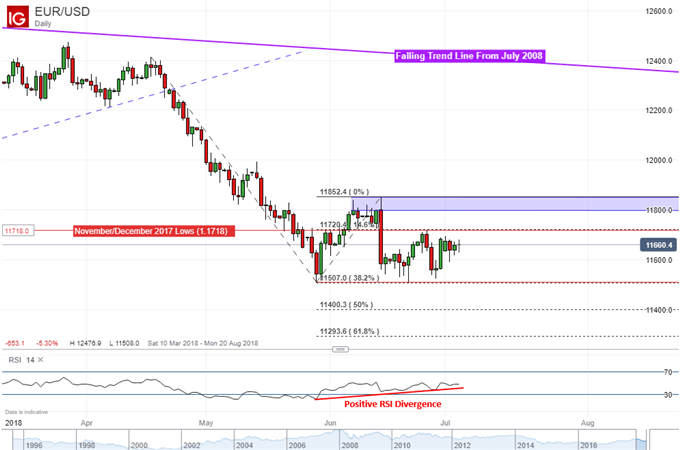