Most Asian benchmark indexes declined by Wednesday afternoon trade, echoing losses from the US session where sentiment soured. There, China temporarily banned US chipmaker Micron Technology Inc. from selling its products to the world’s second largest economy.

In Japan, the Nikkei 225 was down more than 0.35% and losses were the most pronounced in the information and technology sector. Chinese shares resumed falling as well, keep in mind that another down week for the Shanghai Composite would mean its longest losing streak since 2011.

It was not any different in Australia or South Korea were the ASX 200 and KOSPI fell about 0.45% and 0.17% respectively. While the movements in equities were pronounced to a certain extent given the illiquid trading conditions due to the incoming US Independence Day holiday, FX markets were relatively more restrained.

Not surprisingly, the anti-risk Japanese Yen was cautiously higher. What was more surprising were partial gains in the sentiment-sensitive Australian and New Zealand Dollars. Although the former got a boost from some solid retail sales and Caixin PMIs.

This may have been due to some weakness in the US Dollar. It was unable to capitalize on haven bids given its world reserve status. In fact, similar to the previous session, the greenback was inversely following the Chinese Yuan as USD/CNH fell to levels last seen on Monday. The Yuan has slowly been gaining ground after the PBOC took verbal and physical measures to help stabilize its recent plunge.

We also had some brief commentary from the Bank of Japan. Policy Board Member Yutaka Harada spoke and said that additional easing might be needed in the event inflation loses momentum. In fact, looking at Japan’s headline inflation rate, CPI has been slowly losing its pace since this year began. At one point, it clocked in at 1.5% y/y in February. It was most recently recorded at 0.7% in May.

On a daily chart, you can see how USD/CNH has been pushing lower lately in comparison to its remarkable uptrend since the middle of June. It immediately faces the rising support line from then and a push below it could mean more losses ahead. Such an outcome places the 38.2% Fibonacci Retracement as the next target around 6.5997. 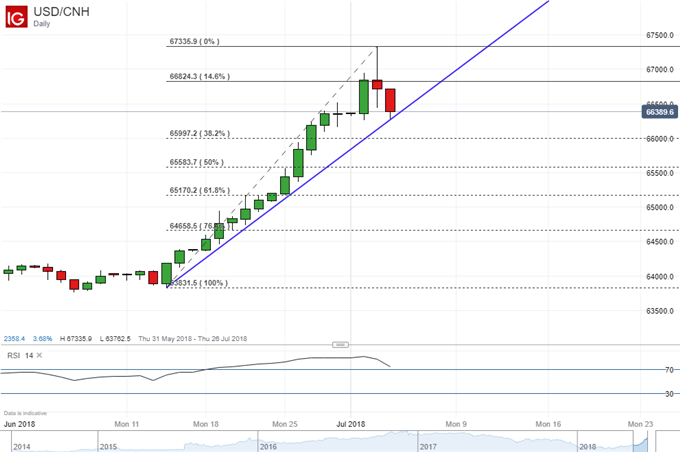