What makes the very best traders stand out from the rest? We’ve been looking hard at the numbers, trying to isolate the Traits of Successful Traders.

On Sunday US President Donald Trump used Twitter to ask all countries to lower trade barriers or face new retaliation. Last week he directed the US Trade Representative to identify US$200 billion of Chinese goods with a view to imposing an additional 10% tariff.

On the same day the People’s Bank of China cut the amount of cash some banks must keep on hand, which newswires said was a stimulus move aimed at spurring lending to smaller firms. Sure enough, the Shanghai Composite was the only notable regional gainer, adding 0.2% as its close approached. The Nikkei 225 was down 0.4%, meanwhile, with the Hang Seng, Kospi and ASX 200 all lower too, if not by much.

The Euro remained quite buoyant thanks to stronger Eurozone economic data last week and investor perception that Italy’s politics may not be the threat to stability they might have been. This strength kept the US Dollar away from 11-year highs against a basket of its most widely traded rivals. Turkey’s lira gained the country’s President Tayyip Erdogan claimed electoral victory for his ruling AK Party.

EUR/USD seems to have quite solid support at the lows of late May, which also contained bears last week. 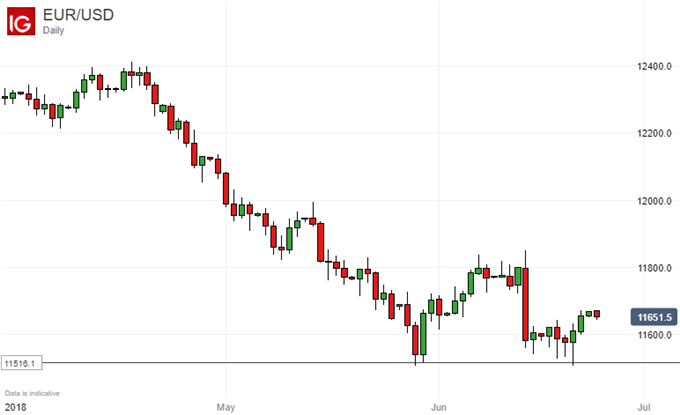 Gold prices got an early lift from trade worries, but that faded as the session wore on. Crude oil prices tried to factor in an output increase agreed by OPEC and non-OPEC producers on Friday, with the Brent benchmark falling sharply before pulling back.

Still to come on Monday is the German Ifo business survey for this month, and the US new home sales release for May.