What makes the very best traders stand out from the run-of-the-mill? We’ve been looking hard at the numbers, trying to isolate the Traits of Successful Traders.

Asian stocks look set to end the week in mixed fashion after a rather choppy Friday trading session.

Global trade’s prospects- or lack thereof- continue to dominate market sentiment, although there was little new information on that score beyond International Monetary Fund calling trade tensions the biggest economic threat to the Eurozone.

The equity outlook appears more cautious in the region, too. Morgan Stanley is among those to downgrade its index targets, with a stronger US Dollar prominent among reasons why. There was also some focus on OPEC, which meets later Friday in Vienna. The expectation is that last year’s enduring production cuts may be rolled back. Reuters reported that Saudi Arabia’s energy minister had spoken of a consensus being around a one million barrel/day increase in output.

The Nikkei slipped nearly 1% with the Hang Seng and ASX 200 joining it in the red, if not to the same extent. Shanghai and Seoul saw their mainboards rise.

The session was short of economic numbers. Of what there was, the most important was Japanese consumer price inflation. This came in very modestly above expectations but pricing power remains extremely weak, doubtless to the consternation of the Bank of Japan, which has made long, strenuous attempts to stoke it.

The Japanese Yen gained nonetheless against a broadly weaker US Dollar. On its daily chart USD/JPY remains within the secondary uptrend channel which has bounded trade since late May, but only just. 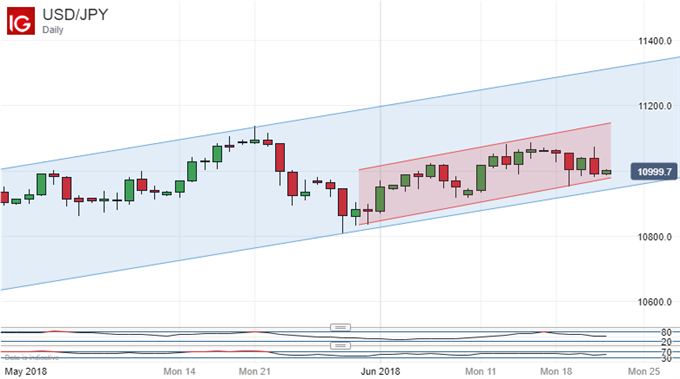 The greenback took a knock from some weaker US economic numbers, while the British Pound continued to gain after Thursday’s more hawkish voting split on the Bank of England’s Monetary Policy Committee.

Crude oil prices gained as that OPEC meeting approached, while gold prices were steady in Asia around six-month lows. The prospect of higher US rates has dimmed demand for non-yielding gold.

Still to come on Friday are numerous Purchasing Managers Index releases from around Europe and the US. Official Canadian Consumer Price Index data are coming too.