Asian shares were mixed by Friday afternoon trade as trade war fears took the spotlight next after the ECB rate decision stirred volatility in the markets. Reports crossed the wires that US President Donald Trump approved tariffs on $50 billion of Chinese goods. The White House is expected to release on updated list of those targets later today.

The Nikkei 225 was up about 0.39% at the time of this writing, but most of its gains occurred when the index gapped higher. This may have been due to ECB rate hike bets being pushed further out in 2019 which leaves policy looser for longer. However, the Japanese benchmark then declined as China was reported getting ready to retaliate to US measures.

Speaking of, China’s Shanghai Composite fell about three quarters of a percent. Australia’s ASX 200 on the other hand was up about 1.26%, pushed higher by all sectors of the index. In South Korea, the KOSPI was down about 0.45%, echoing declines from yesterday when US Secretary of State Mike Pompeo said that North Korean sanction relief won’t happen without denuclearization.

The Bank of Japan monetary policy announcement was able to generate some Yen volatility, albeit it was rather restrained. The BoJ both left the policy balance rate and the 10-year JGB yield target unchanged as expected at -0.100% and 0.000% respectively. Simultaneously, the central bank downgraded their assessment of CPI, seeing it in a range of 0.5% to 1.0%.

As a result, the Japanese Yen was a little bit weaker as lower inflation could mean stimulus for longer. USD/JPY rose to a session high at the time but was on its way to pare gains afterwards. Meanwhile, the sentiment-linked Australian and New Zealand Dollars declined as some Asian shares declined following market open. 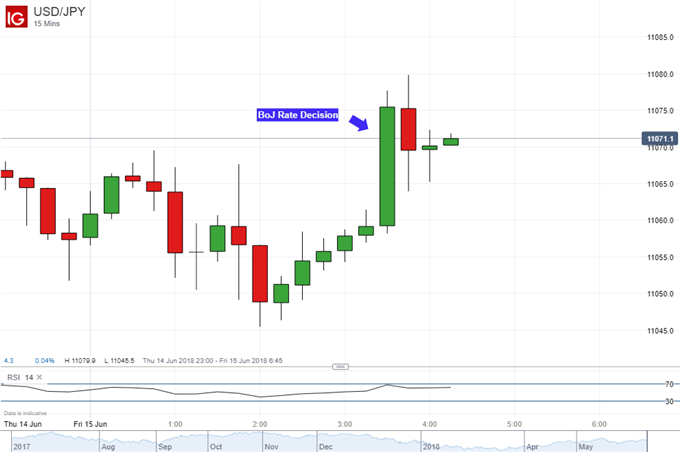 With that, this week’s top tier event risk are now behind us. From here, the rise in US consumer confidence could send the greenback higher later today. Being the anti-fiat unit, such a result could put gold prices under pressure.

On a daily chart, USD/JPY remains tamed in a rising channel as it approaches 2015 descending resistance. The pair does not show any immediate signs of topping since it resumed its advance in late-May. In the instance that it cannot overcome the obstacles ahead and turns lower, immediate support is the lower line of the ascending channel. A push below that will expose the 14.6% minor Fibonacci extension at 109.09. 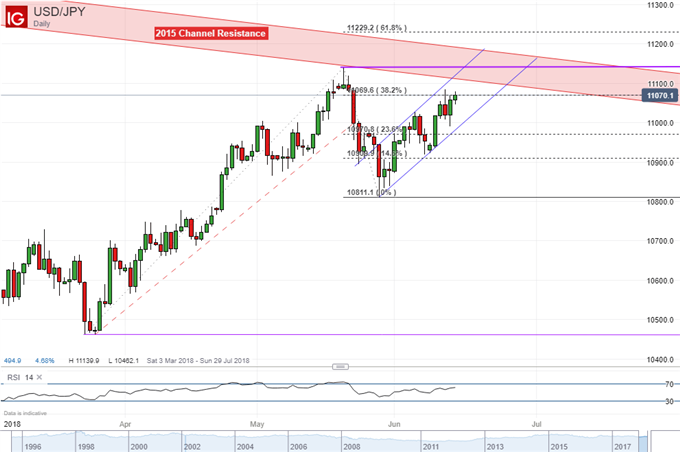