ECB surprised markets by announcing decision to reduce the pace of QE purchases after September 2018 by EUR 15bln until the end of December 2018, by which net purchase will come to an end. This immediately saw the Euro rise to session highs. However, the gains were short lived after the ECB provided guidance in regard to its interest rate guidance, whereby the council judged that current rates will remain at current levels at least until Summer of 2019, which in turn saw EURUSD fall to session lows. Following the comment regarding rate hikes, money markets now price in a 40% chance of a 10bps hike by July, down from 70%. 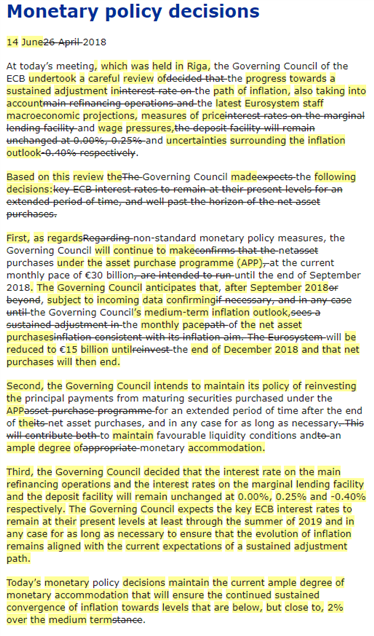 (ECB Statement Comparison from Prior Month)

Following the monetary policy statement, this has largely taken the excitement out of President Draghi’s press conference. However, markets will await the council’s thoughts on the latest developments regarding the Trump administrations protectionist policies. At the beginning of the month, the US had imposed aluminium and steel tariffs on the EU, while also threatening auto tariffs, subsequently the EU announced that they will impose retaliatory tariffs from July 1st. As such, the recent escalation in trade wars could see the ECB suggest that risks related to the threat of increased protectionism have risen, potentially dampening there view on the growth outlook by noting that risks are “tilting to the downside” as opposed to broadly balanced.

ECB staff are likely to upgrade their view on inflation amid the surge in oil prices, which have risen over 20% since the last set of staff projections on the back of escalating geopolitical tensions. Another supporting factor for inflation will be the weaker Euro, in which the trade weighted index has fallen 2.4%. As a reminder, most recent inflation figures jumped to 1.9%, while the core reading remained rather low at 1.1%.

In regard to growth forecasts, there is a possibility that these could be downgraded given the fact that recent data, most notably from Germany has continued to slow hinting at growing underlying weakness in the Eurozone economy. Last week saw the release of Eurozone GDP, which confirmed that Q1 growth had slowed to 2.5% on the year.