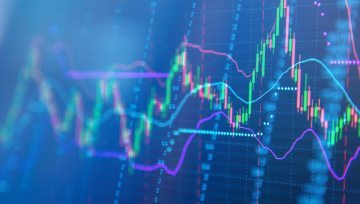 Asian shares were mostly higher by Tuesday afternoon trade, though they swung throughout the session as Donald Trump’s meeting with North Korean Leader Kim Jong Un took place. Heading into the Singapore summit, the markets appeared to have taken bets for a denuclearization outcome of sorts. The anti-risk Japanese Yen fell as Nikkei 225 futures rose.

At this point, some of those optimistic bets may have unwound as North Korea’s Kim did not answer questions on denuclearization. However, he did say that the event is a ‘good prelude’ for peace. Meanwhile, Mr. Trump noted that they will have a ‘terrific’ relationship and that he has no doubt about it. Prospects of more peace down the road may have what kept shares afloat, but a lack of details on the nukes probably kept them from reaching their full potential.

On the currency side of things, the US Dollar also saw increased demand ahead of the summit and it rose against its major counterparts. However, as some of those optimistic bets pulled back, the greenback followed suit and was only cautiously higher. The sentiment-linked Australian and New Zealand Dollars appreciated.

From here, signs of denuclearization can boost sentiment as it lowers the chance of conflicts around the Korean peninsula. During the discussions, the US president said that they are heading for a signing and will reveal what is being agreed to. In addition to that, the White House has announced that Trump would deliver a post conference around 4pm local Singapore time which translates to 8:00 am GMT.

Beyond the summit, attention quickly starts turning to the economic calendar which is loaded with event risk this week. Later today, we will get UK average weekly earnings. On Monday, worse-than-expected local manufacturing output send the British Pound lower. In general, UK data has been tending to underperform relative to economist’s expectations as of late. More of the same can further depreciate Sterling.

On a daily chart, AUD/USD remains wedged in-between key support and resistance. The former is defined by 0.7591 which is a combination of highs set in late-May and support in early June. The latter is a mix of the descending trend line from February and 0.7648. From here, a break above resistance exposes the rising trend line from January 2016. On the other hand, a break below 0.7591 leaves the ascending support channel from early May as the next target. 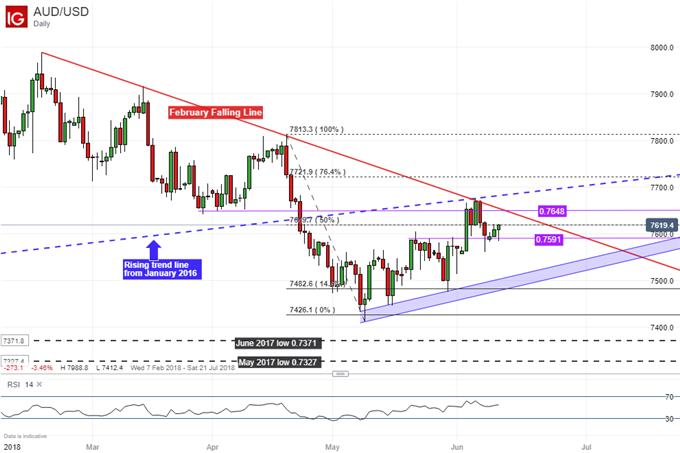