A day that was filled with event risk saw markets swinging as traders braced for the impending FOMC and ECB rate decisions later on. Wall Street was cautiously higher and the S&P 500 managed to keep gains, rising about 0.17%. The intraday volatility though did leave an impact on sentiment-sensitive currencies with the Australian and New Zealand Dollars down against its major counterparts. This was further compounded by a rise in the US Dollar towards the end of Tuesday’s session.

Of all the forex majors, the British Pound was arguably the most volatile given the EU withdrawal bill. Initially, Sterling rose as news crossed the wires that several conservative lawmakers said that they would vote with Theresa May’s government. Then, when the Brexit bill passed 324 to 298 and fended off the Tory rebellion, GBP/USD declined and finished the day little changed. To appease some tories for the vote, May had to offer a concession that would allow them to potentially veto the Brexit deal she secures.

A Look Ahead – AUD Awaits RBA Speech, Markets Look to Fed and ECB Next

The most prominent event risk during Wednesday’s Asia trading session is arguably a speech that will be presented from RBA’s Governor Philip Lowe. For some time now, the central bank has reiterated that their next rate move is likely to be a hike, but for the time being they are being patient to act. At this point, overnight index swaps don’t envision one until about halfway into 2019. Signs from him that it may come sooner is likely to boost the Australian Dollar and vice versa.

Given the impending monetary policy announcements from the US and European Union ahead, it won’t be too surprising to see restrained price action in FX until those critical events have passed. In addition, the weekend G7 summit and yesterday’s summit between US President Donald Trump and North Korean Leader Kim Jong-un are also now behind us. This furthers adds to the argument that we may see consolidation for the time being. However, some traders may be eager to take bets. 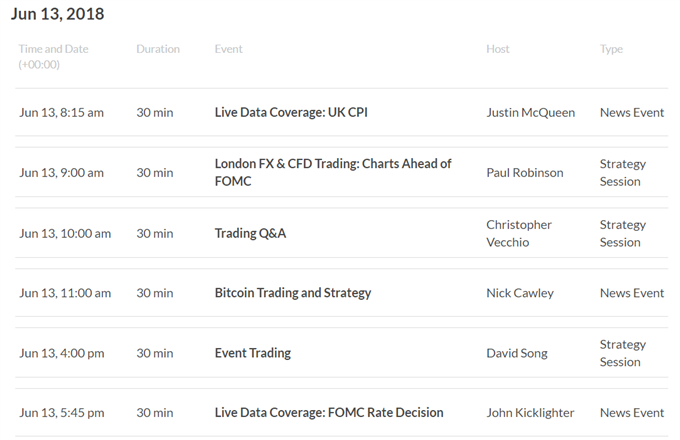 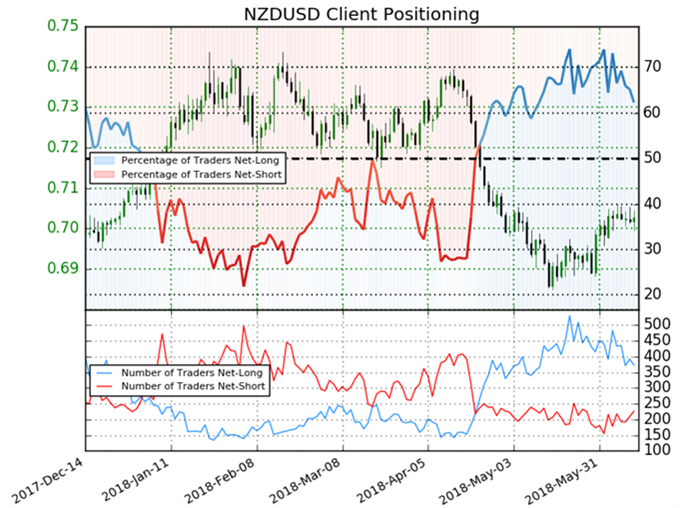 Retail trader data shows 62.3% of NZD/USD traders are net-long with the ratio of traders long to short at 1.65 to 1. In fact, traders have remained net-long since Apr 22 when NZD/USD traded near 0.73652; price has moved 4.6% lower since then. The number of traders net-long is 6.3% lower than yesterday and 14.6% lower from last week, while the number of traders net-short is 15.3% higher than yesterday and 3.7% higher from last week.