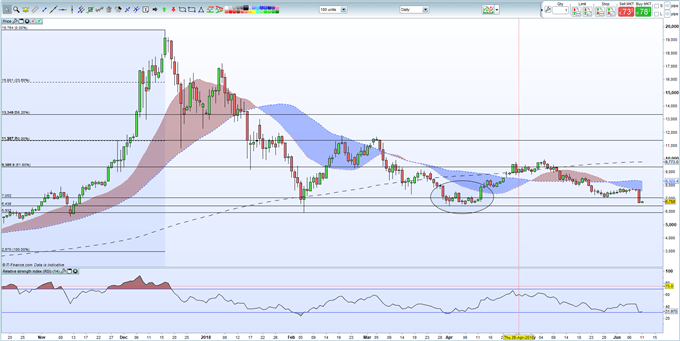 IG Client Sentiment highlights how clients are currently positioned in a wide range of cryptocurrencies and how positioning has changed over the last week.

South Korean cryptocurrency exchange Coinrail revealed that it had been hacked on June 10 and that some of the exchanges cryptocurrency holdings had been stolen. Coinrail said in a statement that 70% of the cryptos it holds are safe, while two-thirds of the stolen tokens – NXPS, NPER and ATX – have been frozen or recovered. The news from this small exchange – Coinrail just makes it into the top 100 crypto-exchanges by volume traded – sent the marketplace spiraling lower with double-digit losses commonplace.

The move over the weekend may have been exacerbated by thin trading volumes but the fact that a small crypto-exchange hack produced such a large move shows how fragile the marketplace is.

The weekend falls tested many important technical support levels with mixed results. Bitcoin (BTC) rebounded just ahead of a support cluster made in late April and looks likely to re-test the $7052 double-low made on May 28/29. A re-test of the $6,438 cluster would open the way to further losses with the February 6 low at $5,932 the first target.

The third-largest token by market capitalization, Ripple (XRP) fell sharply after hitting strong resistance at the 200-day moving average over the last week. Ripple repeatedly tested resistance on the four-hour chart yet failed to trade and close higher. XRP currently trades around $0.58 after trading close to the May 29 double-low at $0.545. 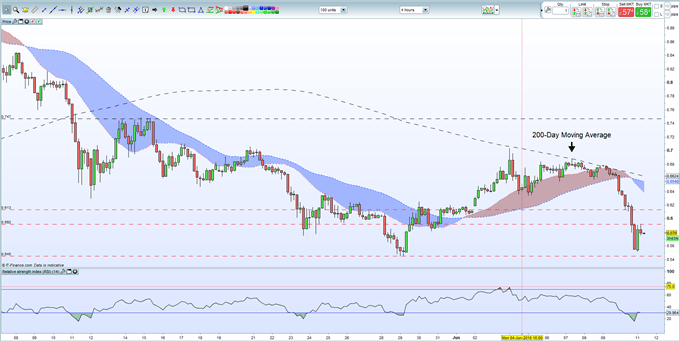 Ether Finds Support at $500 for Now

Ether seems to have found some short-term support around $500, just ahead of the December 22 swing low at $497. The chart however does still look negative and a break below these levels could see ETH fall all the way back down to the early April low at $359. 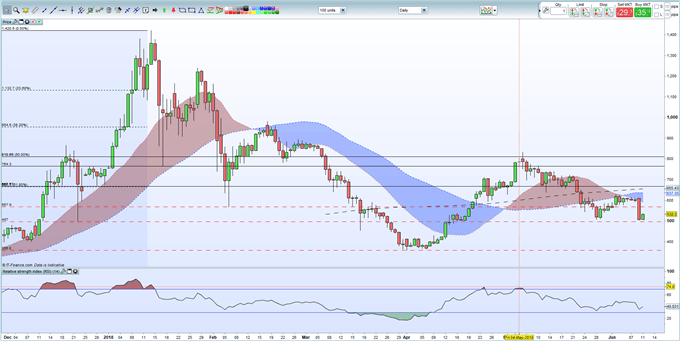 If you are interested in trading Bitcoin, Bitcoin Cash or Ethereum we can offer you an informative Introduction to Bitcoin Trading Guide.

What’s your opinion on the latest cryptocurrency moves? Share your thoughts and ideas with us using the comments section at the end of the article or you can contact me on Twitter @nickcawley1 or via email at nicholas.cawley@ig.com.