Asian shares were mixed Monday as well they might have been given all the news stories investors have to digest. Stocks weren’t helped by reports from last weekend’s meeting of the Group of Seven nations in Quebec. That get-together was fractious with the US looking still-more isolated in its enthusiasm for new trade barriers and readmitting Russia to the block. Europe and Canada have threatened counter-action against the US, keeping trade war fears very much front and centre for the markets.

However Asian Focus quickly turned to Tuesday’s summit meeting between Donald Trump and North Korean leader Kim Jong Un. Markets seem very unsure what to expect from this in terms of concrete progress, with relentless media speculation adding nothing solid to the mix. North Korean sources have reportedly said they seek a durable peace. Donald Trump spent Monday with his Singaporean government hosts.

The Nikkei was up by 0.6%, with stocks in Hong Kong and South Korea higher too. Australian markets were thinned considerably by the Queen’s Birthday break and the ASX was closed. Shanghai slipped a little

There are also three central bank monetary policy meetings coming up this week, from Japan, the Eurozone and the US. The Federal Reserve is expected to raise interest rates again, with the European Central Bank tipped to discuss some withdrawal of its own monetary stimulus.

The Japanese Yen made some gains in Asian hours as that G7 meeting weighed on risk appetite. USD/JPY seems to have settled back into the broad range trading which has dominated for the past couple of months. 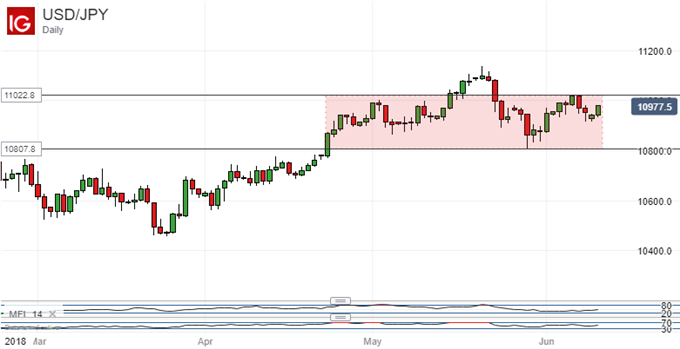 US Dollar Vs Japanese Yen, Daily Chart With Current Range

The Euro was a little higher too as investors looked toward the ECB.

Crude oil prices slipped on news of increased supply from both the US and Russia, while gold prices also ticked higher.

Still to come on Monday are trade and industrial production numbers out of the UK.