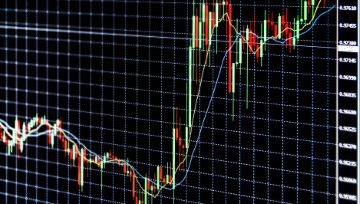 Find out what retail traders’ Equities buy and sell decisions say about the coming price trend!

Asian shares ended up following Wall Street higher by Thursday afternoon trade on a general pickup in market sentiment. This followed reports on Wednesday that US Treasury Secretary Steven Mnuchin asked Donald Trump to exempt Canada from metal tariffs ahead of a key G-7 Leaders Summit towards the end of the week. However, most of the gains were due to gaps higher.

Japan’s Nikkei 225 did so and was up about 0.88%, spending most of the Asian session consolidating and pushing slightly higher. Chinese shares were more hesitant with the Shanghai Composite close to little changed. South Korea’s KOSPI was roughly 0.68% higher. Australia’s ASX 200 was boosted by the materials sector, with BHP Billiton up about 1.8%.

Despite the rise in Asian shares, the FX spectrum did not follow suit as you would expect. For one thing, the anti-risk Japanese Yen was cautiously higher. General US Dollar weakness may have contributed to this. The Australian Dollar was arguably the worst performing major, held down by a worse-than-expected trade balance report which followed a miss in current account data from Tuesday.

We had some comments from China’s Commerce Ministry Spokesman Gao Feng. He said that the country does not want to escalate trade tensions with the US and that the country intends to expand imports if the two countries move closer on resolving trade disputes.

Ahead, we will get a press conference from Bank of Canada’s Governor Stephen Poloz. USD/CAD is still awaiting a major break up or down and his comments may send the Canadian Dollar higher. A lack of major economic data will probably have markets continuing to eye risk trends. Signs that the US president may soften his stance on the metal tariffs ahead of the G-7 Leaders Summit could add fuel to the rise in stocks.

On a daily chart, the ASX 200 has been making a push higher since late-May and has now approached a near-term descending line from early May. A push above it may eventually lead the index to test the highs set back in that month. For now, it also needs to push above 6,060 which appears to be presenting itself as former support now resistance. A turn lower would leave 5,979 as support followed by the 38.2% Fibonacci retracement at 5,951. 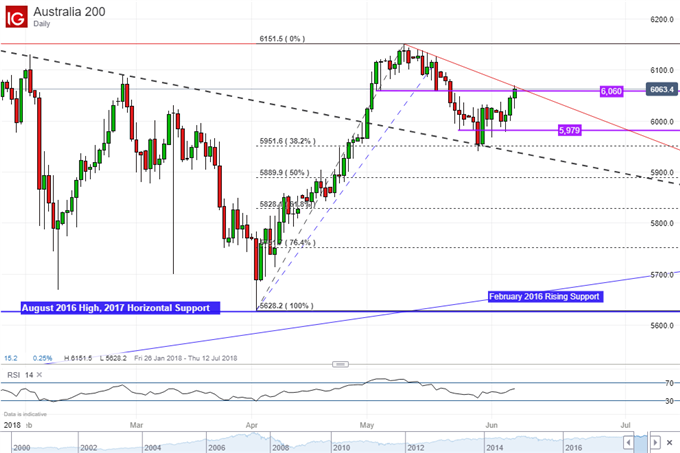 ASX 200 and other Equities Trading Resources: