Asian stocks headed cautiously lower by Tuesday afternoon trade after a revival in sentiment from the beginning of this week lost momentum. There, the markets seemed to have cheered a better-than-expected US jobs report from Friday and shrugged off trade concerns as China threatened to call off deals with the world’s largest economy. Now, a lack of updates on this front have markets eager for fresh catalysts.

In the meantime, the threat of tighter lending conditions may have remerged into the eyes of investors following a rather choppy week for risk trends. Just before Asian market come online today, the US Dollar managed a partial recovery as local bond yields rallied. This signaled firming Fed rate hike expectations. In fact, the greenback was slowly rising throughout the beginning of Tuesday’s session.

The Nikkei 225 was higher at open, but declined thereafter and was heading lower to finish little changed. Australia’s ASX 200 met a similar fate but fell more aggressively and was down about 0.30% at the time. South Korea’s KOSPI also declined abruptly after market open, but trimmed some of its losses and was down about 0.13%. Chinese shares edged a little higher, with the Shanghai Composite up more than 0.20%.

The Australian Dollar fell, albeit lightly, on a status quo RBA rate hold at 1.50 percent as expected. Comparing the revised statement to the prior one, there was not a meaningful change to their tone that would insinuate moving away from the patient stance on moving rates. The central bank reiterated that they are where they need to be for sustainable growth in the economy and achieving the inflation target over time.

Looking at local government bond yields, they declined as the monetary policy decision crossed the wires. This suggests that some hawkish bets were disappointed. Yesterday, rosy Australian retail sales and corporate profits saw AUD/USD rise to its highest since April. Some of those bets on the Aussie may have been unwinded. 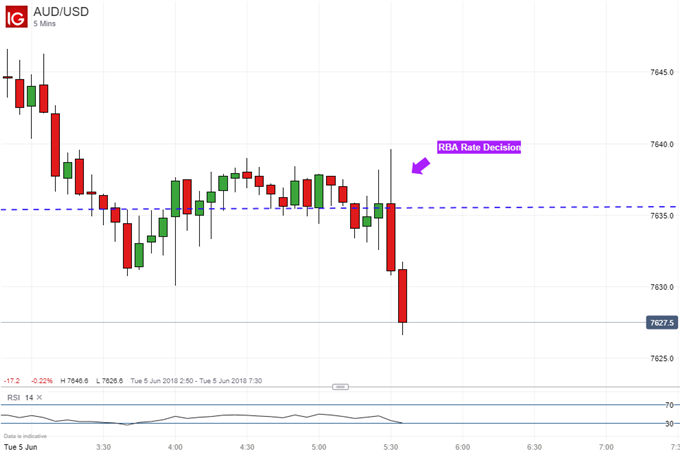 As mentioned earlier, AUD/USD put in an impressive push higher on Monday but looking at the daily chart below, it remains just below critical resistance areas. For the pair to keep climbing and potentially reverse some of its downside progress since February, AUD/USD has to get above the near-term falling resistance (red line on the chart below). However, this area is closely aligned with the January 2016 trend line.

A continuation of its ascent would then place the 76.4% Fibonacci retracement at 0.7718 as the next target followed by the April 19th high at 0.7813. On the other hand, if AUD/USD falls near-term support could be the 50% midpoint of the retracement at 0.7612 followed by 0.7591. A fall below those would expose a rising support channel that is made up of the higher lows set in May. 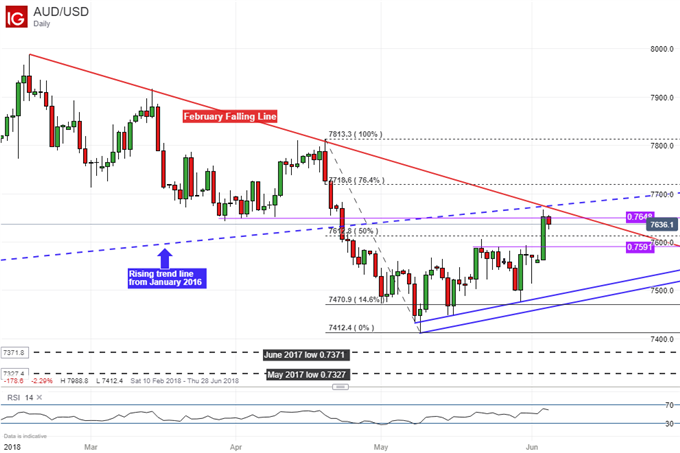