The US Dollar was unable to capitalize in the aftermath of a better-than-expected ISM service sector survey. This reading offers an insight into the key segment of the US economy, consumption, and can carry longer-term implications for growth. More positive outcomes can lead to higher inflation down the road which can impact the trajectory of Fed tightening. But, the markets had their attention elsewhere.

After being sworn in as the Prime Minister of Italy last week, Giuseppe Conte noted on Tuesday that a Euro exit has never been discussed by the government. The markets cheered the news and the Euro rose aggressively against its major peers. The US Dollar gave up some of its gains from earlier. On Wall Street, the S&P 500 also reversed, climbing to finish the day little changed after declines on the US ISM data.

A Look Ahead – Australian Dollar faces GDP Data, Could Fall

During Wednesday’s Asian session, we will get the first quarter Australian GDP data. Economists are anticipating for growth to pick up across the board. However, Australian economic news flow has been tending to underperform relative to estimates for most of this year so far. This opens the door for a downside surprise that may send AUD/USD lower. The pair was unable to push above pivotal resistance so far.

The British Pound was arguably the best performing major on Tuesday, also supported by a better-than-expected local services PMI report. UK government bond yields rose hinting at firming BOE rate hike bets. Crude oil prices initially fell when the US was reported asking OPEC to raise production by 1 million b/d. However, the commodity finished the day higher, rising along with sentiment on the Italian update. 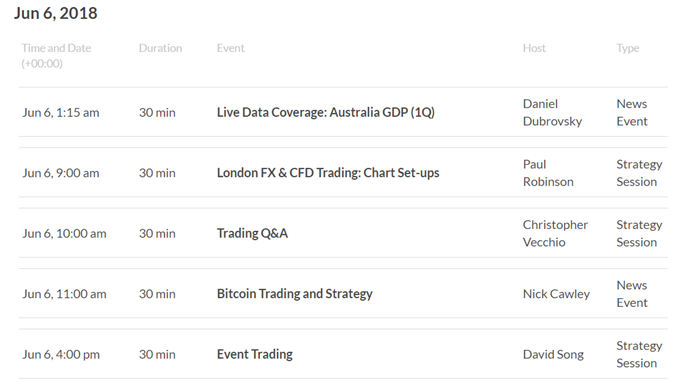 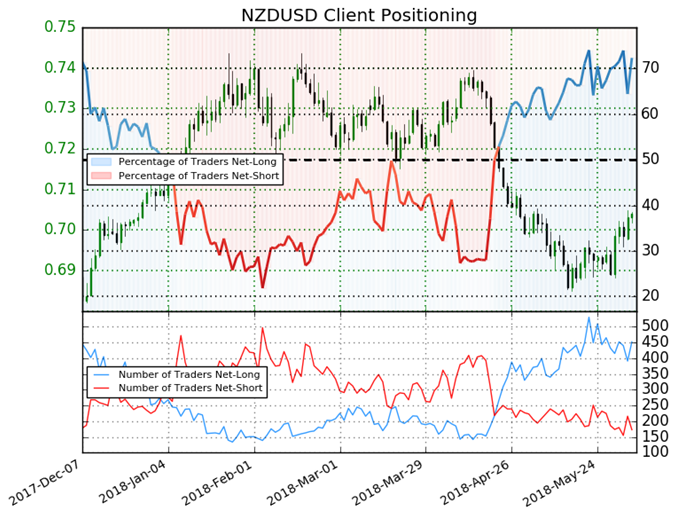 Retail trader data shows 72.3% of NZD/USD traders are net-long with the ratio of traders long to short at 2.61 to 1. In fact, traders have remained net-long since Apr 22 when NZD/USD traded near 0.73417; price has moved 4.1% lower since then. The number of traders net-long is 5.9% higher than yesterday and 0.2% higher from last week, while the number of traders net-short is 11.3% lower than yesterday and 20.6% lower from last week.