As expected, most Asia/Pacific shares were lower by Tuesday afternoon trade where risk aversion engulfed the markets. The declines in stocks echoed losses from the European session where Italian political jitters unsettled the markets. Italy is now heading for a new election, potentially by the fall too. This allows the anti-establishment Five Star Movement and League parties to consolidate for a potential majority.

The Nikkei 225 declined over 1 percent in illiquid trading conditions as the markets were still slowly coming back online after the memorial day long weekend. South Korea’s KOSPI fell more than 0.7 percent. In China though, things were slightly different. While the Shanghai Composite was down more than 0.5%, the index and other Chinese shares briefly rallied at market open before sentiment got to the best of them.

This may have been attributed to reports in the China Securities Journal, which were later confirmed, that the PBOC is planning on lowering reserve requirement ratios. This would be in an effort to boost liquidity ahead of an expected shortage in the summer as the country implements financial regulations. Not surprisingly, the ASX 200 was higher as Australia cheered the news thanks to its key trading relationship with the world’s second largest economy.

On the currency side of things, the anti-risk Japanese Yen was easily the best performing major. Meanwhile, the sentiment-linked Australian and New Zealand Dollars fared the opposite fate. Interestingly, once Chinese shares rose after market open, the plunge in AUD/USD seemed to have leveled out.

Ahead, a relatively quiet European economic calendar docket will probably allow risk trends to continue brewing and driving the markets. Keep a close eye on how Wall Street comes online later today. We will get a few speeches from ECB Executive Board Members Yves Mersch, Sabine Lautenschlaeger and BenoitCoeure. Rising concerns from them about Italy may continue adding pressure to the Euro.

USD/JPY Technical Analysis: How Much Longer Will Stubborn Support Hold?

On a daily chart, USD/JPY appears to be making another attempt to push lower after the formation of a shooting star bearish reversal pattern. The pair has struggled to fall below 108.96 which has been holding up since the beginning of this month. A break below stubborn support exposes the May 4th low at 108.64 followed by the 50% midpoint of the retracement at 108.01. Near-term resistance appears to be the 23.6% Fibonacci extension at 109.92 followed by 110.71. 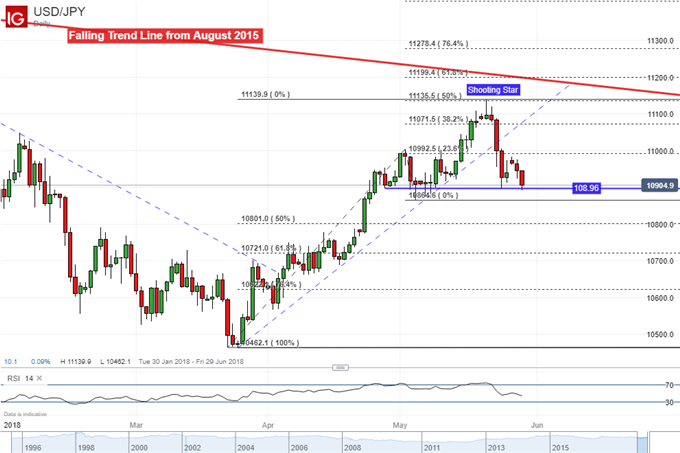