The Japanese Yen didn’t move far Friday despite some more underwhelming news on inflation in the key Tokyo region. However, it continues to pressure the US Dollar as risk appetite wilts and investors wonder about the likely scale of US interest rate rises ahead.

May’s official Tokyo Consumer Price Index rose by 0.4% on the year. That was below the 0.5% expected, which matched April’s print. Excluding food and energy the rise was just 0.2%, when the markets had looked for a 0.3% gain.

Japan’s national CPI has attracted much comment this year as it seemed at one point to be showing the sort of strength that Bank of Japan has long been trying to engineer. However its strength has clearly petered out once more. The last annualized print was just 0.6%, weakening and still miles away from the sustainable 2% target which the BoJ would like to see. 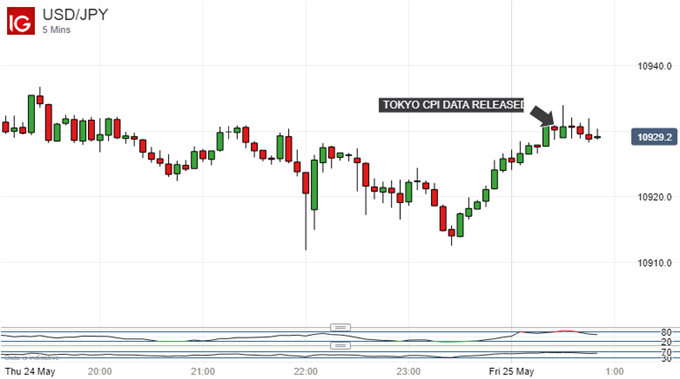 indeed, despite the clear monetary policy divergence between a still-tightening Federal Reserve and a BoJ still committed to massive stimulus for an indefinite period, the Yen has made gains this week.

A little rethink about the likely magnitude of US interest rate rises beyond this year has put some brakes on the greenback’s broad rise, with worries about a trade war with China not helping its cause either. Now the cancellation of a planned nuclear summit between President Donald Trump and North Korean leader Kim Jong Un has sapped risk appetite once more and favored the Japanese currency.

On its daily chart, USD/JPY has this week clearly snapped the uptrend which had previously guided trade higher for the past couple of months. 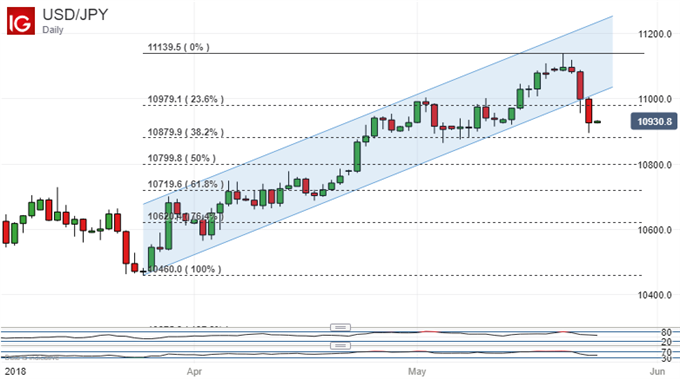 This week’s falls have already taken it below the first, 23.6% Fibonacci retracement of that entire rise. The focus now is on the second retracement which is probably uncomfortably close to the current market for Dollar-bulls’ tastes. It comes in at 108.79