The Central Bank of the Republic of Turkey held an extraordinary rate meeting Wednesday to “discuss recent developments.” The “developments” likely allude to the comments made by rating agencies Fitch and Standard & Poor’s, which accelerated a slide in the Lira on Tuesday. Fitch issued a warning against political interference in monetary policy, a month before the presidential and parliamentary elections are set to take place in the country (June 24). Standard & Poor’s warned of growing concern that the weakening Lira could “potentially” cause a further downgrade of its BB- rating. Together, the warnings propelled the Turkish currency to significant intraday losses – pushing USD/TRY far beyond previous record highs with a peak near 4.93. 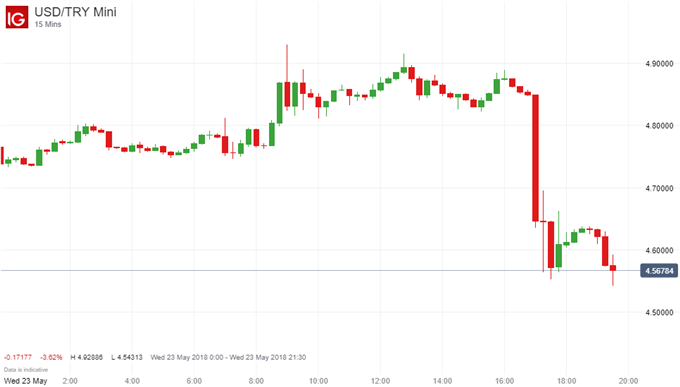 To provoke a response from the markets, the group announced a hefty 300 basis points (3 percentage point) hike to one of its key interest rates. Such a move naturally delivered a temporary reprieve for the Lira as the move signals a willingness of Turkey’s central bank to respond with large-scale actions in contrast to concerns that the policy group was restrained by President Erdogan. The Turkish President claimed high rates are “the mother and father of all evil.” In contrast, Turkey’s deputy prime minister, Mehet Simsek said on Wednesday: “It’s high time to restore monetary policy credibility and regain investor confidence.” A welcome sentiment that likely contributed to the Lira’s bump along with the meeting.

Although the meeting is a sign the central bank intends to combat recent trends, Turkey’s economy faces significant risk should the currency continue to fall. Many Turkish companies hold large foreign currency denominated debts and short-term external debt stood at $181 billion in March, nearly 20% of Turkey’s GDP. Despite the rebound, the Lira is still roughly 20% lower versus the Dollar year-to-date and remains in troubled waters with upcoming political uncertainty. 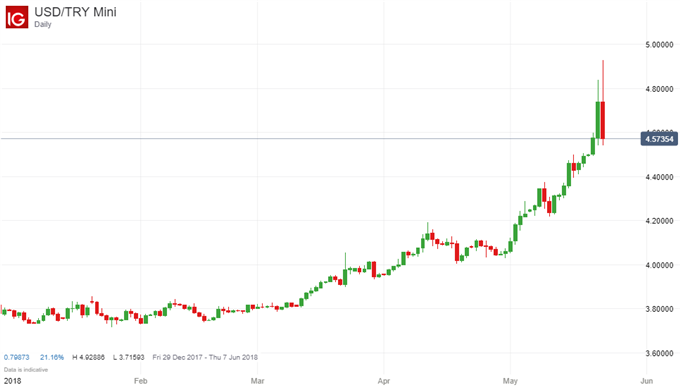