The Australian Dollar showed a negative reaction when local construction work data crossed the wires. In the first quarter of this year, construction work done rose just 0.2 percent q/q versus 1.3 percent expected and -18.3 percent from the fourth quarter of last year. The details of the report showed that overall building construction declined 0.7% while those in the private sector fell 1.0 percent.

These softer figures could potentially bode ill for GDP growth, but they also speak to the housing situation in Australia. The Reserve Bank of Australia expects a “considerable” additional supply of apartments over the next couple of years in eastern capital cities. If total building work is falling and the number of dwellings remain subdued, then this may push prices higher and could cause the central bank to take additional steps to help cool bubbles as it did before.

Still, the central bank has showed us time and time again that they are in no rush to raise interest rates as is. In fact, the decline in the Aussie Dollar accompanied a general pullback in Asian stocks which were down in Japan, China and Australia at the time of this alert. The pullback in sentiment echoed losses seen on Wall Street in the prior session when US President Donald Trump unnerved investors.

Looking ahead, keep an eye out for how risk trends continue behaving. As the European trading session begins, we will also get a speech from RBA’s Governor Philip Lowe. If he continues to repeat that the RBA is indeed in no rush to adjust monetary policy any time soon, then this may not bode well for the Australian Dollar. 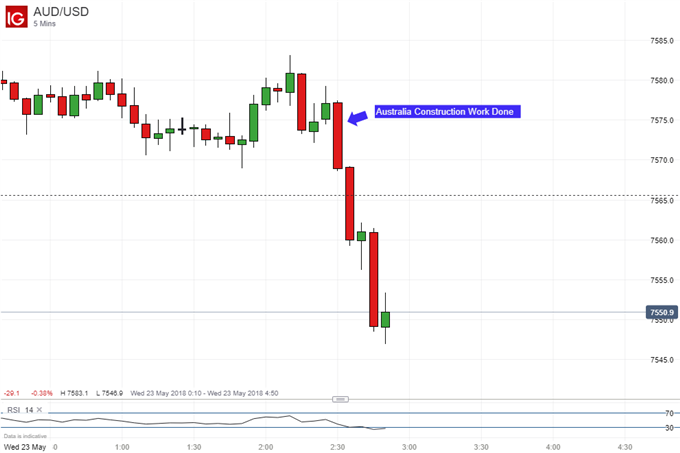 On a daily chart, AUD/USD has pushed higher as expected after positive RSI divergence showed that momentum to the downside was ebbing. The pair has climbed above the lower line of a descending channel after getting stuck below it. From here, near-term resistances is the 50% midpoint of the Fibonacci retracement at 0.7612.

A push above that exposes the 61.8% level at 0.7660 which is also very closely aligned with the rising trend line from January 2016. It could act as former support now resistance. Just beyond that lies the upper line of the descending channel.

On the other hand, if AUD/USD turns lower, than the 38.2% Fibonacci retracement at 0.7565 could catch it. A break below that exposes the lower line of the descending channel back in sight. Bit is also closely aligned with the 23.6% level at 0.7507. 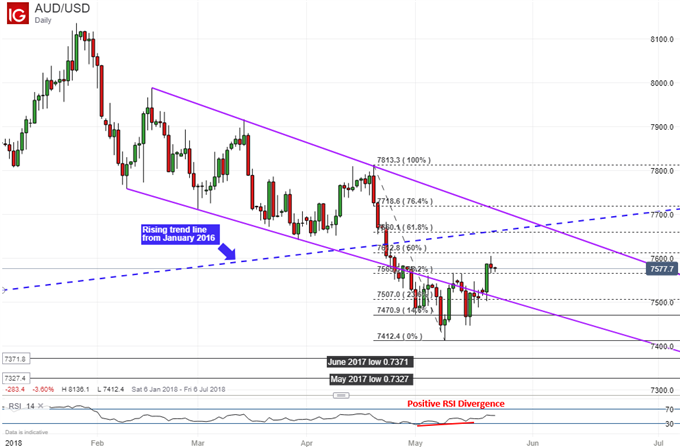