For a more in-depth analysis on the Australian Dollar, check out the Q2 Forecast for AUD

The Australian Dollar received renewed support after the US and China appeared willing to hold back on initial trade tariffs having signaled that a possible trade deal may come to fruition. China had agreed to purchase more US goods as an effort to avoid a trade war, however refused to commit to US demands of reducing their trade surplus by $200bln. The US shared their willingness to avert trade tensions by placing on hold $150bln of tariffs on China imports and previously announced Chinese steel and aluminum tariffs.

This development reduces the risk of softening global demand on the back of potentially lower industrial output from China and therefore supports the Australian Dollar given its large exposure to the nation. In turn, this reaffirms the view for AUDNZD to make a push towards the 1.10 handle having reclaimed 1.09, which is could lead to AUDUSD consolidating above 0.7500.

In the most recent Statement on Monetary Policy (SOMP), the RBA stated that a significant escalation in trade protectionism could derail global economic expansion. As such, this reduction in trade tensions lowers the downside risks towards Australia’s economy and provided the US and China reach a trade agreement, this could provide greater certainty for the RBA to assume that it will be soon appropriate to tighten monetary policy.

Although, it is unlikely that the RBA will raise rates this year, given that a hike is not fully priced in until mid-2019, risks are somewhat tilted to the upside for earlier (Q1 19) than expected monetary tightening. However, this largely remains dependent on whether inflation pressures (wage growth + inflation) are rising within the economy. 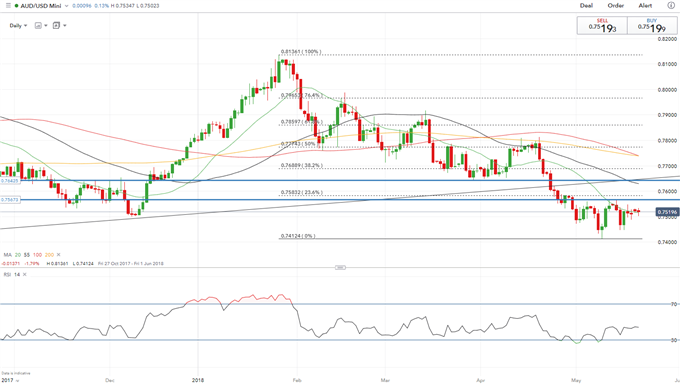 AUDUSD continues to consolidate above the psychological 0.7500, which will continue to act as support. The pair eying the May high at 0.7568, whereby a close above there could suggest further gains for the Aussie is on the cards, which may test the 23.6% Fibonacci Retracement at 0.7583. Ahead, resistance sits at 0.7642 which represents the March low.

According to IG Sentiment, AUDUSD positioning shows that 66.5% of traders are net long, for more information of client positioning, click here