What’s the #1 mistake that all traders make?

Asian stocks were mixed on Friday afternoon as investors fretted about progress in US/China trade talks. President Donald Trump doubted on Thursday that the high-level contacts would be successful, claiming that US trade partners had become very spoiled.

He spoke on the day a second round of negotiations began in Washington.

Rising US yields continued to lift the US Dollar. Expectations of still-higher US interest rates have taken the ten-year benchmark’s yield up to near seven-year highs. More weak inflation data out of Japan weighed on the Yen, which sank to four-month lows against the Dollar. The prospect of any removal of Japan’s extraordinary stimulus seems as remote as ever.

USD/JPY remains very well supported and has now passed the February highs which had capped its advance this week. 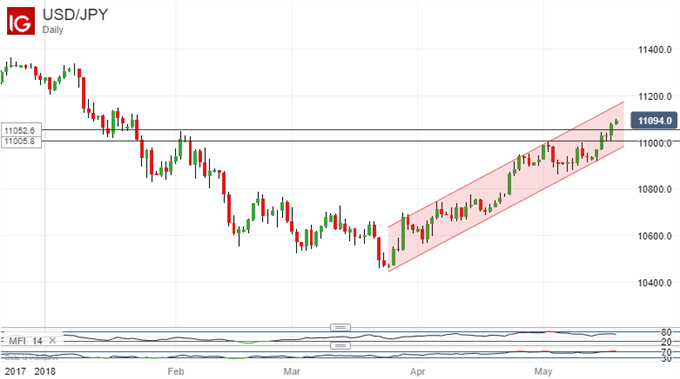 If the US Dollar can close above them then only a cluster of resistance from late January stands between the bulls and this year’s peaks.

Gold prices were steady through the Asian session, with oil inching up a little in the face of ongoing production cuts, reports of strong demand and US sanctions on Iran.

There’s not a huge amount on the data calendar for markets to get their teeth into on Friday. Canadian consumer price data may attract some attention.