Asia AM Digest: CAD Down, Yen Awaits CPI and Stocks May Rise

The Bank of Japan removed any precise mention in regards to the timing for reaching two percent inflation in its most recent monetary policy announcement. This comes ahead of April’s Japanese CPI report which is due early into Friday’s Asia trading session. On the whole, price growth is expected to slow down and it may even undershoot expectations. This is because generally speaking, since the beginning of this year Japanese economic data has been tending to increasingly underperform relative to economists’ expectations.

We got a sample of this when earlier this week, Japanese GDP not only missed expectations, but contracted and ended the longest run of economic growth since the 1980’s. Generally speaking, local economic data tends to have minimal impact on the Japanese Yen. This is due to its limited implications for Bank of Japan monetary policy expectations. However, given that the central bank is trying to bolster inflation which remains well below its target, it wouldn’t be too surprising to see some Yen weakness if CPI does disappoint.

The Canadian Dollar is cautiously lower in early Asia trade following news from US Trade Representative Robert Lighthizer that NAFTA countries are ‘nowhere near close to a deal’. His comments crossed the wires just hours after Canada’s Prime Minister Justin Trudeau said that they ‘were close to a deal’. With that in mind, the May 17th deadline to reach a deadline set by House Speaker Paul Ryan seems out of the reach.

Meanwhile, China was reported to offer US President Donald Trump a $200 billion cut in its annual trade deficit with them. This was one of Trump’s key demand for China which he threatened to impose additional tariffs on trade. Earlier in the day, Mr. Trump said that he ‘doubts’ that Chinese trade talks will be successful. With that in mind, keep a close eye on Asia shares. If they rally on this news, then the anti-risk Yen could fall while the sentiment-linked Australian Dollar rises. 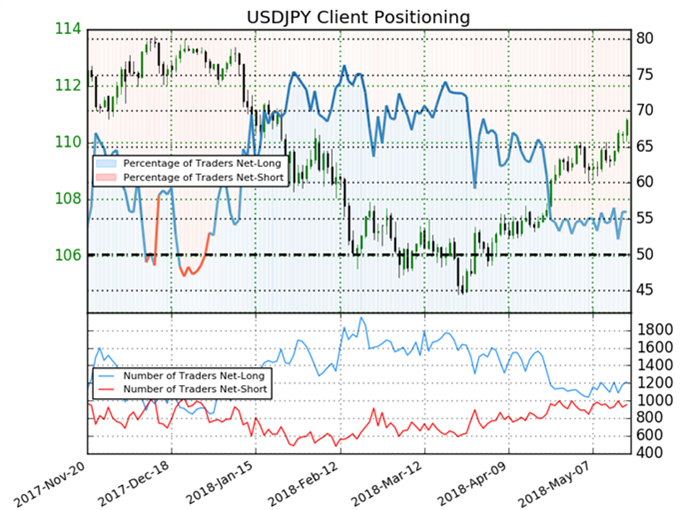 Retail trader data shows 56.0% of USD/JPY traders are net-long with the ratio of traders long to short at 1.27 to 1. In fact, traders have remained net-long since Dec 29 when USD/JPY traded near 112.467; price has moved 1.5% lower since then. The number of traders net-long is 1.8% higher than yesterday and 1.1% lower from last week, while the number of traders net-short is 2.9% lower than yesterday and 2.1% lower from last week.