See our Q2 JPY forecast to learn what will drive the currency through the quarter.

Whether its trade wars between China and the US, geopolitical tensions on the Korean Peninsula or an anti-EU coalition set to govern Italy, the threat to risk sentiment will likely see investors flock to the Japanese Yen with the typically safe-haven currency gaining against major pairs (EUR, AUD).

Overnight, North Korea displayed an abrupt change of heart after cancelling a meeting with South Korea leaders, while also stating that they will walk away from its meeting with US President Trump if the US make one sided demand for NK to give up its nuclear weapons. Subsequently, this has brought into question whether the Trump-Kim summit will take place next month and serves as a reminder that a US-NK summit was never going to be plain sailing. As such, the JPY will likely remain firm amid a dent in risk sentiment on the potential risk of rhetoric alluding to a sudden North Korean withdrawal from the US-NK summit.

Another event set to weigh on risk appetite is the threat posed by the incoming League/5 Star governing coalition. Recent draft documents by the parties have noted that they will ask the ECB for EUR 250bln in debt relief, while also looking to introduce a mechanism under which countries could leave the EUR. In turn, this has pressured the EUR, with EURJPY dipping through 130 as German-Italian 10yr spreads widen over 10bps to 140bps. A step up in the anti-EU stance will likely see EURJPY revisit 2018 lows (128.94). 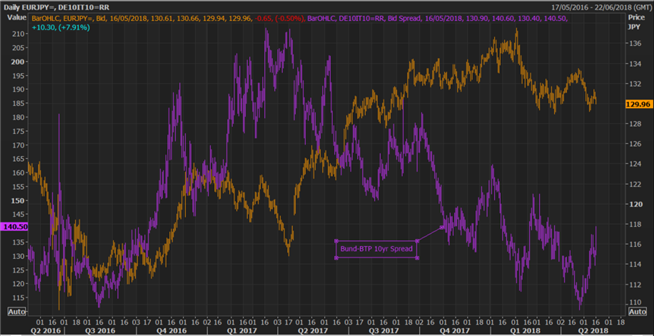 A factor that has kept the JPY suppressed has been the fact that the Bank of Japan’s monetary policy stimulus remains very expansive and has shown no signs of a near term exit, given that inflation is still a long way from the central banks price goal. This is in stark contrast to the FOMC where expectations have been rising that the central bank will deliver 3 additional rate hikes this year. Consequently, this has led to a widening of the bond yield spreads between the US and Japan, resulting in a push higher in USDJPY which now hovers above 110. However, the prospect of tighter monetary policy conditions weighs on asset valuations (notably stock prices) resulting in JPY support via repatriation flows.

EURJPY: Widening German-Italian spreads amid rising Italian political concerns will likely to EURJPY target the YTD low at 128.94, whereby a firm break could see a move towards 127.50 provided an anti-EU stance by the League and 5 Star Party escalates. Alongside this, benign inflation continues to remain a headache for the ECB while the central bank may need to see further data to gauge the recent cooling of growth, which could lead to a delay in their announcement of a policy shift. 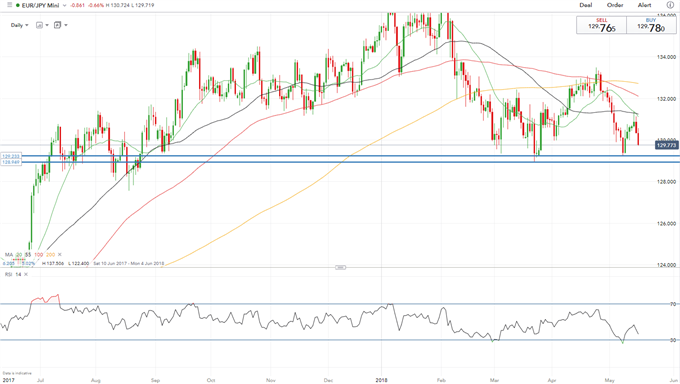