Asia AM Digest: Yen May Gain if Sentiment Falls. Not on GDP Beat

Prior Session Recap – US Dollar Gains and Sentiment Deteriorates

Tuesday’s trading session could have been characterized by two main themes. The first is broad US Dollar strength. The greenback was one of the best performing majors, rising alongside a push higher in local government bond yields as Fed rate hike expectations firmed. Upward revisions in US retail sales seemed to have helped this dynamic. But there seemed to have been another force that may have given the greenback a boost.

A second well-performing FX major was the anti-risk Swiss Franc. It appreciated as the S&P 500 declined about 0.68%, putting in its worst fall in just about two weeks. Meanwhile, sentiment-sensitive currencies like the Australian and New Zealand Dollars depreciated. The US Dollar can at times benefit when risk trends decline across the board given its highly liquid status, and they sure did.

On this front, the two largest world economies are amidst settling trade disputes with both sides having their issues. Ahead of China’s Vice Premier Liu He visiting the country to negotiate, US Ambassador to China Terry Branstad said that the two countries are still “very far apart”. Meanwhile, Chinese fixed asset investment slowed to its lowest since 1999. On the whole, most Asian benchmark indexes also finished the day in the red.

In addition, there is more uncertainty in the markets as they await an Italian majority government outcome that combines the two anti-establishment parties. By the end of Tuesday’s session, Five Star Movement leader Luigi Di Maio said that a deal may be sealed on the next day as he still has some issues to resolve with Matteo Salvini.

With a deterioration in sentiment, the anti-risk Japanese Yen could benefit if Asian shares echo the declines seen on Wall Street. Meanwhile, the currency may not get much support from local GDP figures. Data out of Japan has been tending to outperform relative to economists’ expectations. Even if we get more of the same in the data, it will most likely have limited implications for Bank of Japan monetary policy expectations. 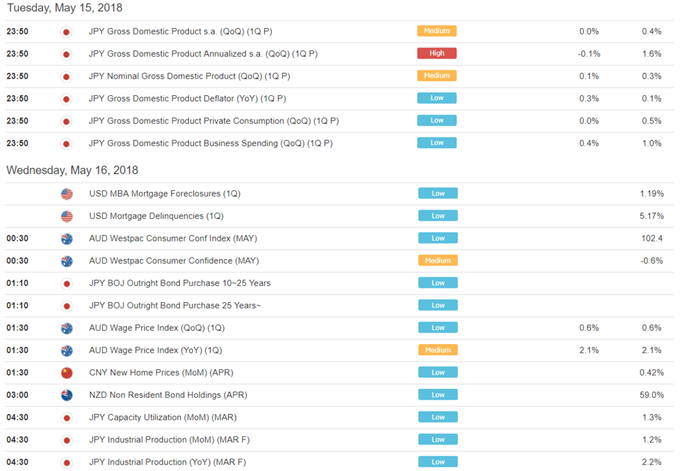 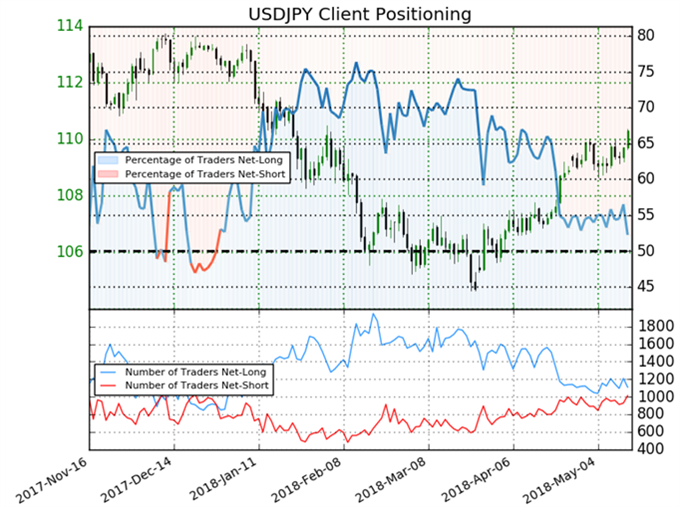 Retail trader data shows 52.3% of USD/JPY traders are net-long with the ratio of traders long to short at 1.1 to 1. In fact, traders have remained net-long since Dec 29 when USD/JPY traded near 112.467; price has moved 1.9% lower since then. The number of traders net-long is 8.1% lower than yesterday and 6.2% lower from last week, while the number of traders net-short is 3.8% higher than yesterday and 0.5% lower from last week.