The University of Michigan consumer confidence report for May reveals consumer sentiment was unchanged from April. Although unchanged, the report surpassed expectations of a 98.3 print with a reading of 98.8. The report is an important gauge for other US economic metrics like consumer credit. After declining from a 14 year high in April amid concerns of trade wars and volatility in capital markets, the steadiness in the report is an encouraging sign for the US ecnonomy.

Despite the rise of geopolitical tensions splashing news headlines, the US consumer has found buffer in various encouraging domestic reports as of late that likely facilitated the headline survey’s hold and the uptick in expectations (89.5 from 88.4 in April). Firstly, the unemployment rate has continued to decline and now rests at 3.9%, the lowest in 17 years. Despite the decrease in unemployment this month, fewer survey respondents anticipated additional declines. Richard Curtin, the curator of the sentiment report, stated “consumers have a remarkable track record for anticipating changes in the actual unemployment rate.” Similarly, respondents noted wage gains that likely contributed to their positive reflections in the May reading. Despite these encouraging aspects, there were still areas of concern to be found. Respondents changed their anticipation of inflation, moving it up from 2.7% to 2.8% for the coming months – though that may further speculation of faster Fed hikes and in turn support the Dollar’s recovery. In fact, in conjunction with rising inflation, 80% of consumers are confident the Federal Reserve will increase interest rates in the year ahead.

As we look to markets, there was limited movement attributable to the sentiment report, but US markets have moved timidly into the green today. While the report paints a rosy picture for the ecnonomy as respondents noted that the economy is growing, many were aware that it has been a long expansion period. By similar measure, the Dollar would not register a strong response from either a position of economic strength or through more hawkish interest rate expectations. 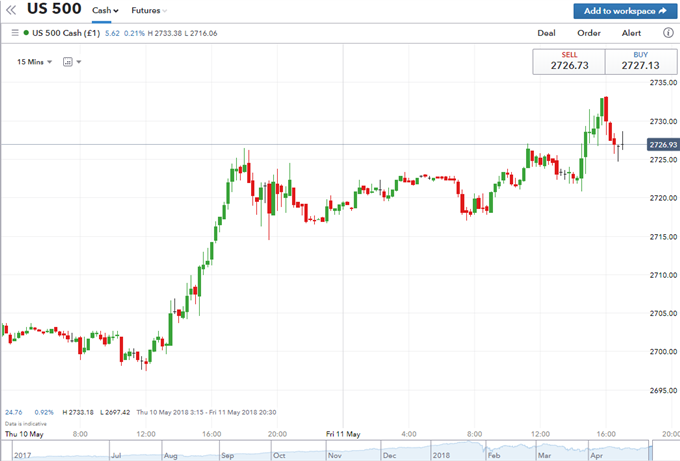