Trade the News: Bank of England Governor to Determine Next Move in GBP

- The Bank of England’s monetary policy committee will almost certainly leave all its settings, including UK interest rates, unchanged today.

- That means GBP traders need to listen carefully to the central bank’s Governor Mark Carney when he comments on the decision.

- The Bank’s economic forecasts will also be important as GBPUSD stabilizes after its recent sharp falls. 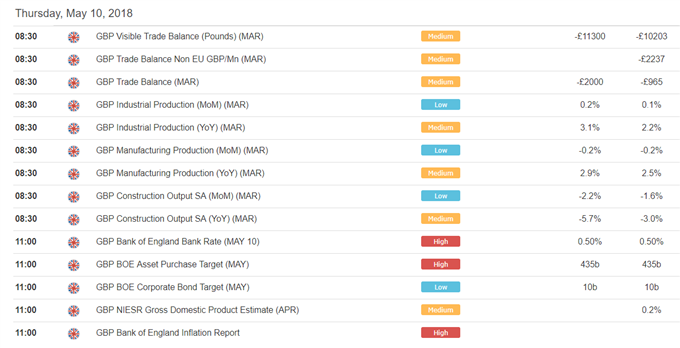 The Bank of England’s monetary policy committee will almost certainly announce no change in UK interest rates and no change in its asset-purchase program today but traders in GBP will need to listen carefully when Bank Governor Mark Carney explains the decision and take a close look at the Bank’s quarterly Inflation Report.

Quite simply, GBPUSD will strengthen if his comments are sufficiently hawkish to suggest a rate rise in August is likely, while optimism about the economy in the Inflation Report would bolster those expectations. Conversely, dovish comments and economic pessimism would send it lower.

The decision will come after a steep downturn for GBPUSD that has been followed by a short period of relative stability.

For a longer-term outlook, take a look at our Q2 forecast for the Pound.

Note from the bottom line on the chart above that the pair is still in “oversold” territory – although less so than it was earlier this month, suggesting that a rally is the more likely option. However, much will depend on whether Carney and the Bank’s staff attribute the recent weakness of the economy to poor weather in the UK earlier this year or regard it as a fundamental problem. They may also be keen to maintain expectations of an interest hike to avoid weakening the Pound and giving inflation a boost.

Note too that whichever way GBP moves, the FTSE 100 index of leading London-listed stocks will likely move in the opposite direction given the inverse correlation between the two.

Join DailyFX Analyst Nick Cawley at 1045 GMT for live coverage of the Bank of England decision. You can sign up for his webinar here

Currently, market pricing suggests that the chances of a rate increase today have fallen to 13% from as high as 87% in April.That reflects both weak UK economic data and comments by Carney, who told the BBC in an interview last month that an interest rate rise is likely this year but that any increases will be gradual.

Since then, official figures have shown that in the first quarter of 2018 UK economic growth slowed to 1.2% year-on-year from 1.4%, its weakest rate of expansion since the second quarter of 2012. Moreover, the purchasing managers’ index for the UK manufacturing sector, a forward-looking indicator widely watched in the markets, fell to a 17-month low in May. The service-sector PMI increased, but by less than analysts had expected.

A lack of progress on Brexit and data from the British Retail Consortium showing the sharpest fall since the BRC started collecting retail sales data 23 years ago have added to the economic pessimism.Investors and traders will therefore be listening out for any hints by Carney that a rate rise in August is on the cards; currently market pricing suggests the chances of an increase are around 57%.

For the pound, this is crucial. After its recent sharp falls it is now showing signs of stabilising above $1.35 and it is quite possible that the currency markets have underpriced the possibility of both hawkish comments by Carney and relatively optimistic forecasts by the Bank. If so, traders are likely to decide that sterling has indeed been oversold and begin to buy it back, reducing some of the losses since it came close to $1.44 in April before being knocked back by Carney’s comments to the BBC and the weak economic growth figures.

GBPUSD levels to watch out for

Returning to the first chart above, the key support level now is the 2018 low of 1.3458 set on January 11. If that is breached then the cluster of December lows around 1.33 will come into focus. To the upside, a retracement all the way back to the April 17 high at 1.4377 would be the ultimate long-term target.

As for the near-term, it is worth remembering that any move after the Bank’s announcement can be swiftly reversed, as it was on February 8 – the last time a decision was accompanied by publication of an Inflation Report.