The Japanese Yen against a generally stronger US Dollar following a raft of local economic data released on Thursday.

Japan’s March trade balance- on the balance of payments basis- rose to JPY1190.7 billion ($10.8 billion), above the JPY 1023.1 billion expected and way ahead of February’s JPY188.71 billion. Japan’s overall current account stood in surplus to the tune of JPY3122 billion, again well above expectations.

Japan stands as something of a global trade bellwether and any data confirming a robust performance is likely to be welcomed. However, the real trade game is being played out between Beijing and Washington- with talks continuing next week and their looming presence may render all previous trade numbers a little too historic for the market.

The summary of opinions from the Bank of Japan’s last monetary policy meeting was released simultaneously. This highlighted the need to continue with powerful monetary easing if the elusive inflation target is to be hit. One member of the policy board wanted to discuss policy normalization and an exist from easing, the summary showed. However with inflation still so far from target this is likely to remain a minority view.

USD/JPY continued to climb after the data but this is likely to be more a function of general moves into the greenback. The BoJ admitted again that it is likely to take some time before inflation hits 2%. It seems likely that the central bank remains as far as ever from tightening policy, despite some market expectations earlier this year that it might move to do so relatively quickly.

The BoJ also expressed concern that a potential tightening of US financial conditions could affect emerging economies and disrupt global markets. 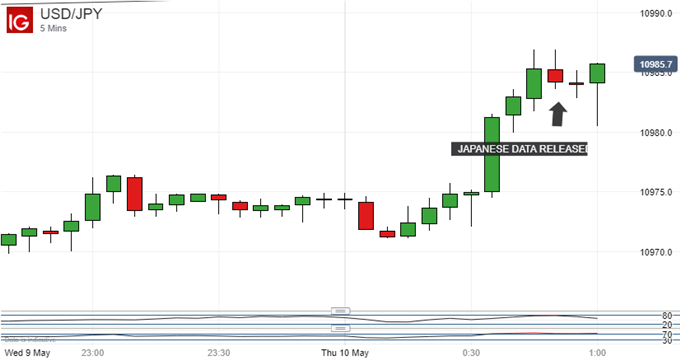 On its broader, daily chart the pair remains in a clear uptrend channel as it has ever since the lows of late March. However, the highs of mid-February in the 110.39 region still appear to be a formidable barrier to Dollar bulls.