Asia AM Digest: Oil Swings on US Iran Exit, MYR Looks to Election

Crude oil prices at one point on Tuesday declined about 3 percent as a report from CNN crossed the wires that US President Donald Trump was to announce that he would allow sanctions to go forward on Iran. This was a sign ahead of his official announcement that he would withdraw from the nuclear agreement.

So why the decline if this outcome could have potential supply disruptions? Leading into the announcement, crude oil has been rallying likely on speculation of such a result. In fact, French President Emmanuel Macron arguably solidified this when he visited the US and said that thought that Trump would pull out of the accord.

For short-term traders who were bullish on oil prices on this outcome, realization meant profit taking and that may have been why oil fell initially. However, crude oil eventually rose as Mr. Trump officially announced that the US will exit the Iran nuclear deal.

Risk trends suffered on initial reports that Trump would withdraw from the accord, the S&P 500 declined as the anti-risk Japanese Yen appreciated. Sentiment-linked currencies like the Australian and New Zealand Dollars ended the day lower. However, Wall Street put in a brief recovery towards the end of the session and most benchmark indexes finished little changed.

A Look Ahead – All Eyes on Tokyo Open, Malaysians go to the Polls

A lack of key economic data releases during the Asian session will probably put risk trends as the driver of markets. Keep an eye out for Tokyo open and how the Nikkei 225 behaves which may carry implications for the Japanese Yen.

Meanwhile, Malaysians will go to the polls on Wednesday for the 14th general election. The Malaysian Ringgit may succumb to selling pressure if the current Prime Minister Najib Razak loses some of his seats in the Dewan Rakyat.

The US Dollar arguably began its appreciation against its major peers on Tuesday as Fed’s Chair Jerome Powell spoke in Zurich. Mr. Powell said that the markets ‘should not be surprised’ by their actions adding that policy normalization is manageable for emerging markets. He essentially continued to prepare the markets for their next anticipated hike in June. 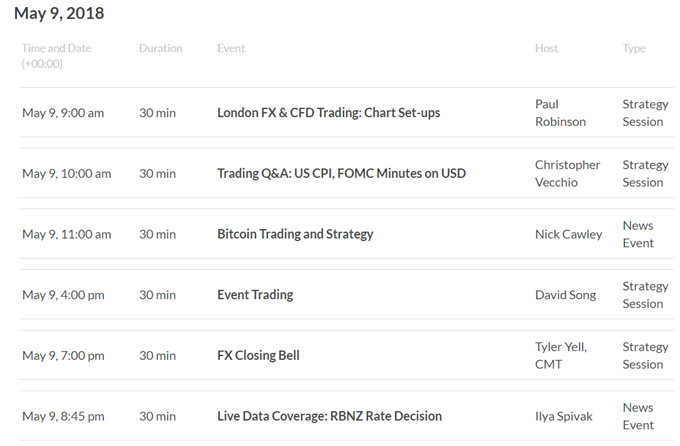 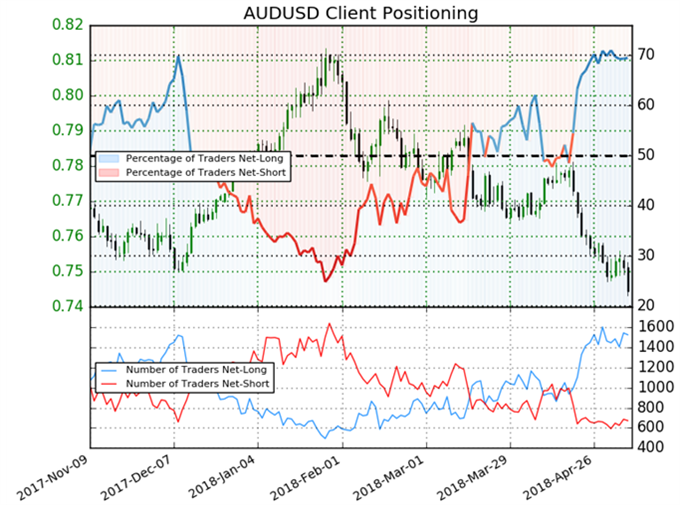 Retail trader data shows 69.4% of AUD/USD traders are net-long with the ratio of traders long to short at 2.27 to 1. In fact, traders have remained net-long since Apr 19 when AUD/USD traded near 0.77699; price has moved 4.2% lower since then. The number of traders net-long is 6.2% lower than yesterday and 4.4% lower from last week, while the number of traders net-short is 1.4% higher than yesterday and 3.3% lower from last week.