The Australian Dollar appreciated against its US counterpart after March’s local trade balance report crossed the wires, and more gains could be ahead. Australia’s net exports (another term for trade balance) was A$1527 million versus A$865 million expected. This was the largest surplus since May 2017.

Looking at the details, both exports and imports rose one percent from February. Overall, today’s data can bode positive for growth as the trade balance is one of the four main components of GDP. In addition, building approvals also rose 14.5% y/y simultaneously versus 10.6% expected.

Despite the rosy data, the Reserve Bank of Australia seems unlikely to do much on it. Earlier this week, the central bank reminded us that they are in no rush to raise rates. With that in mind, the focus for the Australian Dollar now turns to other domestic and external event risk.

On Friday, we will get RBA’s statement on monetary policy. That will offer some fresh inflation projections which may give an idea of when rates may start moving higher. Then, the US jobs report will cross the wires. There, the unemployment rate is expected to tick down as the country adds more jobs. 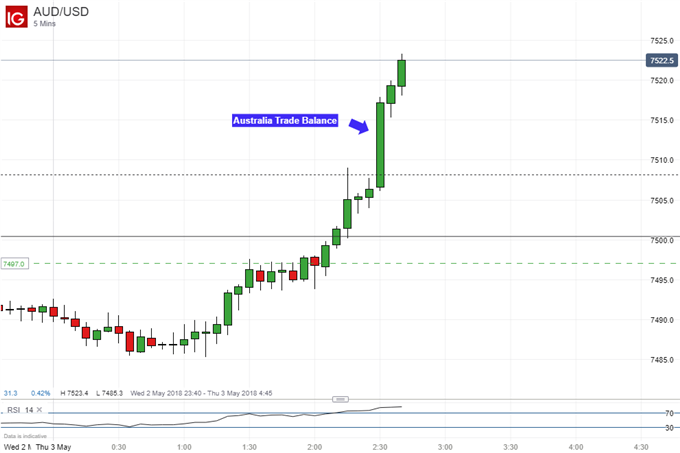 On a daily chart, AUD/USD closed below former support now resistance which was derived from near-term implied volatility readings. The pair has broken below a descending channel and a long term rising trend line which signals that more losses may be ahead. For now, Aussie Dollar seems to have taken a pause.

Following the trade balance report, the pair has pushed higher. If AUD/USD manages to hold on to its gains this session, then a morning star bullish reversal candlestick pattern could form. That would warn of potential gains ahead.

Should AUD/USD push above key resistance, the next target could be the lower line of the descending channel if it acts as ceiling. A push above that exposes the 50% midpoint of the Fibonacci extension around 0.7566. If prices attempt to push lower, they will eventually face the June and May 2017 lows at 0.7371 and 0.7327 respectively. 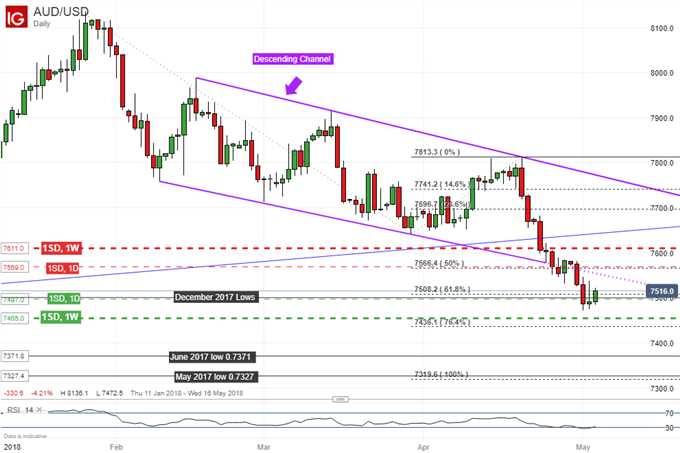