Asian stocks were mixed again on Thursday. Investors digested an as-expected monetary policy decision from the US Federal Reserve and looked to US/China trade talks with what hope they could muster.

The US central bank left interest rates alone as had been all-but universally expected. However, it pointed to gradually rising inflation in a statement judged to have left the door wide open to a hike next month Trade was also in focus thanks to the start of those high-level discussions Thursday in Beijing.

Equity markets were without usual bellwether Japan as that country took a holiday. Even so the ASX 200 and Shanghai Composite managed gains while the Hang Seng and Kospi wilted.

The US-Dollar slipped from its pre-Fed, four-month highs against a basket of its major traded rivals. However, with the policy decision out of the way, the currency felt in need of a new catalyst for much of the Asian session. It may get one soon enough though, with arguably the month’s key data release due on Friday- official US employment numbers. A chunky rise of 191,000 nonfarm payrolls is expected for April.

USD/JPY seems to have stalled around the highs of mid-February, breaking its dominant uptrend line in the process. Time will tell whether this is understandable consolidation or the start of any deeper retracement. 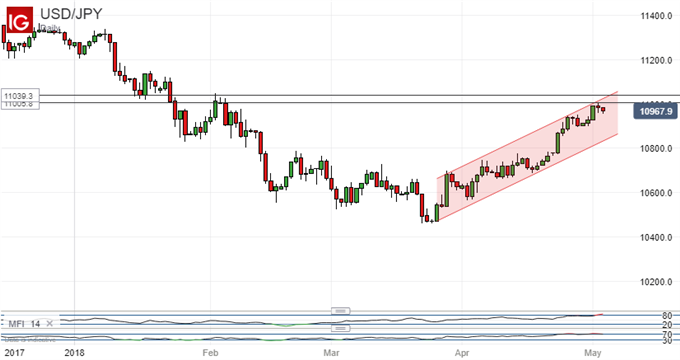 Crude oil prices fell on news of rising US inventories and production while gold prices rose on some caution before those trade talks.

Still to come on Thursday’s economic data slate are Eurozone consumer price numbers, the US service-sector snapshot from the Institute for Supply Management and US trade data. Initial jobless claims figures are also due, as are durable goods and factory order data.