The Japanese Yen was steady against the US Dolllar Wednesday following the release of some strong service sector data out of its home nation.

Japan’s April Purchasing Managers Index came in at 52.5, handily beating the 51.3 seen in March. Combined with the manufacturing survey already released this gave a composite reading of 53.1, well above the previous month’s 51.3.

It would seem that, despite much talk of trade war between Washington and Beijing and signs of waning growth in Europe, the Japanese economy remains reasonably robust as the year’s second quarter ages. The lack of movement in USD/JPY after the numbers is probably explained by the proximity of the Federal Reserve’s May monetary policy decision and Japan’s ongoing inflation weakness.

Indeed the Bank of Japan recently dropped reference to the possibility of its 2% inflation target being hit next year, prompting markets to wonder anew whether it ever can be. 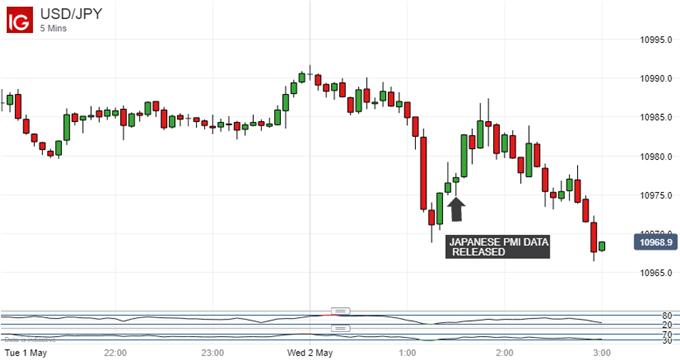 More broaldy the US Dollar remains very much in the ascendant against the Japanese currency as the prognosis of a Federal Reserve still on the rate-hiking path contrast sharply with a Bank of Japan which still has the monetary taps wide open.

USD/JPY is currently attempting to scale February’s peaks once more. They guard the year’s summit which was made in January. 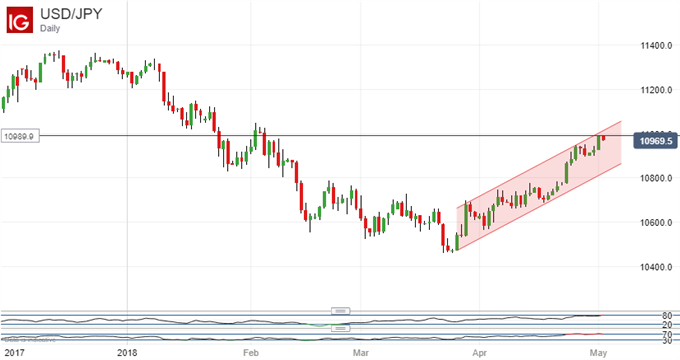