The Australian Dollar showed a positive response to China’s April Caixin Manufacturing PMI print, but AUD/USD could be in for some losses ahead. The purchasing managers index was 51.1 versus 50.9 expected and 51.0 in March. Keep in mind that a reading above 50 shows expansion while one below that indicates contraction.

This means that China’s private manufacturing sector expanded, similar to what we saw in the official estimates. Output also rose coming in at 51.7 from 51.4 in March. New orders fell compared to the prior month and it was the lowest reading since September 2017. The better-than-expected outcome was also counter to the dominant trend of local data tending to underperform relative to estimates since the middle of March.

Since China is Australia’s largest trading partner, economic news flow from the latter tends to have knock-on effects on the latter. Still, despite the improved data, it is unlikely to have an impact on the Reserve Bank of Australia’s monetary policy outlook. Just yesterday, the central bank left rates unchanged and showed us that they remain patient before considering raising rates.

With that in mind, the Australian Dollar will probably look to external factors next for price direction. Later on Wednesday, we will get the FOMC rate decision. While no adjustments to lending rates are expected there, policymakers may echo hawkish commentary such as those mentioned by Lael Brainard recently. If the higher-yielding US Dollar appreciates as a result, then it may do so at the expense of its Australian counterpart.

Finally, do keep an eye out for how some ASEAN bloc currencies react in the aftermath of this release. Countries such as Singapore and Indonesia also have key trading relationships with China. There may be some gains to be had from the Singapore Dollar and Indonesian Rupiah. 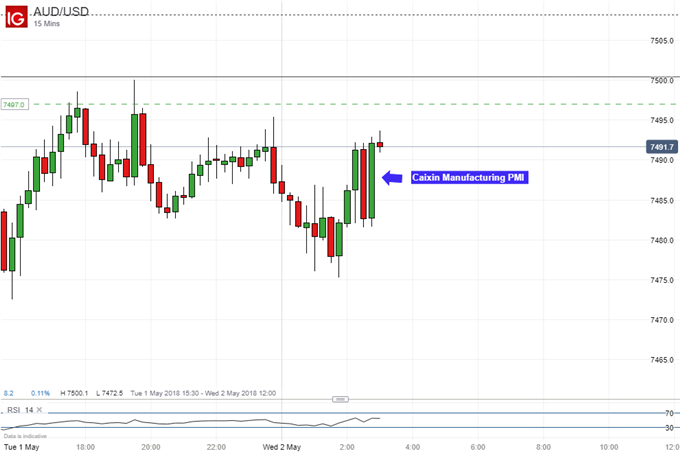 On a daily chart, we can see that AUD/USD broke below a key support level that was derived from yesterday’s implied volatility readings. The pair continues to make progress lower and has now fallen below a descending channel from February.

On the other hand, if prices try to push higher, then immediate resistance is the key level it broke below which is around 0.7497. A push above that exposes the lower line of the channel which could act as former support now resistance. 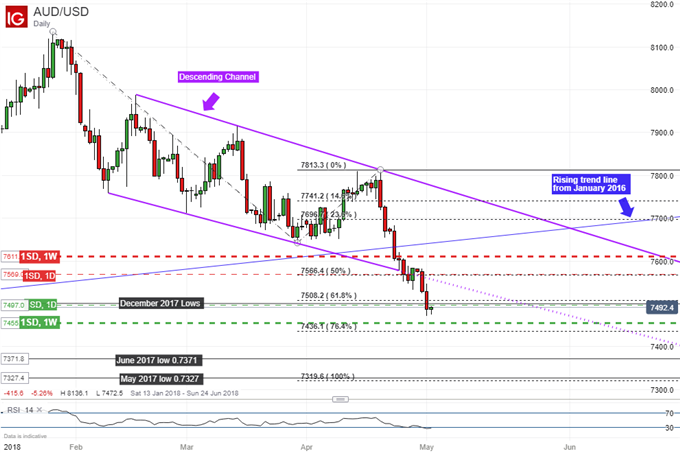