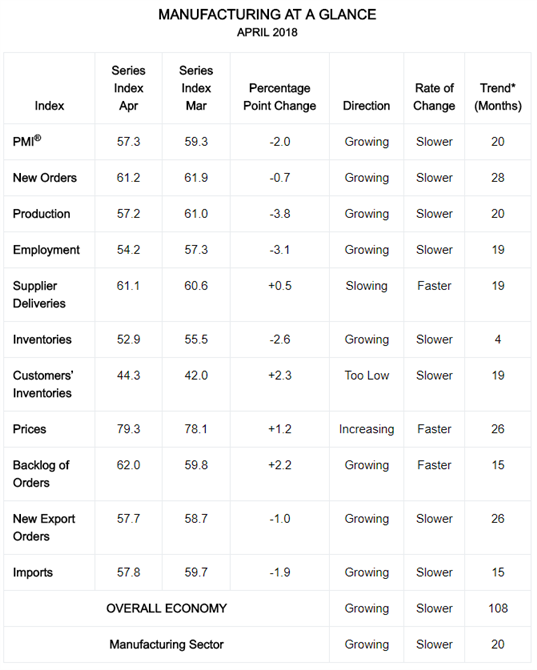 The Institute for Supply Management’s (ISM) Timothy Fiore, issued today’s rather disappointing PMI report. He reported that reported that the manufacturing sector survey fell by 2% to 57.3% from the March reading of 59.3%. This marks the lowest reading since July 2017 at 56.5%. The Production Index recorded an even steeper decline at -3.8% to 57.2% in April from 61% in the previous month. Similarly, the Employment Index recorded a sharp drop of its own at 54.2% falling 3.1% from the 57.3% reading in March. And again, the New Orders Index fell, but by only 0.7% to 61.2% from 61.9% in March. One of the few ISM indices that rose was the Price Paid Index which recorded a 1.2% increase to 79.3%. Fiore stated that this “indicated higher raw materials prices for the 26th consecutive month.

Overall the commentary from the ISM panel reflected continued expansion in business strength. Despite the disappointing figures in April, demand remained strong as the New Orders Index was above 60 fro the 12th consecutive month. Additionally, the backlog of Orders Index expanded and reached the highest reading since May 2004. Fiore stated that demand remained robust but “the nation’s employment resources and supply chains continue to struggle.”

Comments from the Panel

Robust demand remains the theme as the New Orders Index remained above 60 for the 11th consecutive month. This has dragged down the customers’ inventories index to its lowest reading since July 2011. Consumption continued to expand indicating that labor and skill shortages are affecting production output. Supplier deliveries, inventories and imports, were negatively impacted by weather conditions, steel and aluminum disruptions, and equipment shortages.

Asian holidays; lead time extensions; steel and aluminum disruptions across many industries; supplier labor issues; and transportation difficulties due to driver and equipment shortages. Export orders remained strong, supported by a weaker U.S. currency. The Prices Index is at its highest level since April 2011, when it registered 82.6 percent. In March, price increases occurred across 17 of 18 industry sectors. Demand remains robust, but the nation’s employment resources and supply chains are still struggling to keep up.”

Notable responses from the ISM survey:

Below is a list of economic releases that has driven the US Dollar slightly lower: 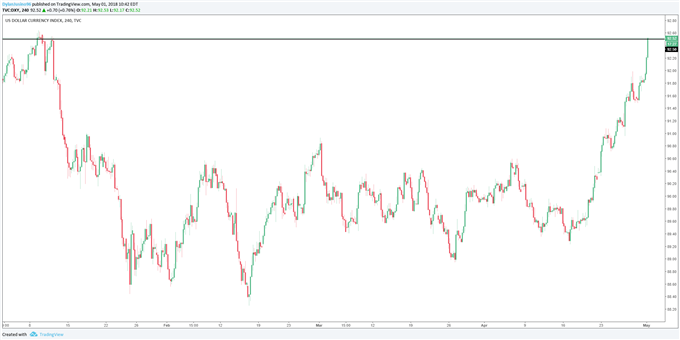 The US Dollar Index has completely overlooked today’s bearish ISM report and traded at highest level since January 11th. After reaching 92.50 DXY may continue this uptrend ahead of the FOMC meeting. This is heavily dependent on any indication that Fed will raise rates at least three more times this year marking in four hikes for the year. At the time that this was written DXY traded at 92.52.