US AM Digest:DXY Rises on Anticipation of Hawkish Fed; EUR, GBP Fall on Political Concerns

USD: The Bullish momentum seen last week for the US Dollar has continued this morning, which comes ahead of a slew of major risk events, most notably the FOMC rate decision on Wednesday and NFP report on Friday. USD somewhat unfazed by today’s PCE figures which were largely in line with expectations, although the Fed’s preferred measure of inflation rising to a 17-month high will likely provide the Federal Reserve with some encouragement. The DXY looking to make a test for the 92.00 handle with the USD bulls largely finding support from the weaker EUR and GBP. Alongside this, month-end rebalancing models have signaled modest USD buying in the run up to the London FX fix.

GBP: Trend lower in GBPUSD shows no sign of abating amid rising political concerns after Home Secretary Amber Rudd resigned after claims that Rudd had misled parliament regarding immigration metrics. GBPUSD currently eying near-term support at 1.3712 (Mach 1st low), which also coincides with the March 2017 trendline support. Catalyst for 1.3700 will likely be on the upcoming UK PMI data, where investors will be looking to see if there is a rebound suggesting that recent data had indeed been largely impacted by temporary influences as opposed to weak underlying factors in the UK economy.

EUR: The Euro is among the worst performing G10 currencies this morning amid a raft of relatively subdued inflation figures with both Portuguese and Italian inflation printing below expectations. Germany headline CPI figure rose above expectations however the core metrics remained subdued, subsequently posing downside risks towards Thursday’s inflation report. Aside from the data front, Italy’s 5 Star Party leader has called on for a snap election as government talks to form a coalition flounder. EURUSD back below 1.2100, near-term support at last week’s low of 1.2055 before the 200DMA at 1.2050. 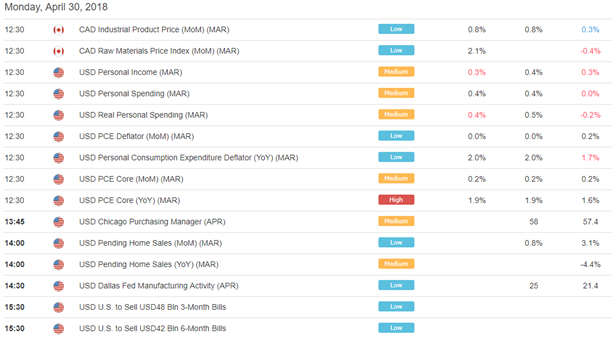