Those Asian markets which were open managed gains for April’s final trading session on Monday. Holiday closures took mainland China and Japan out of the game, however.

All bourses in play posted gains, with the ASX 200, Kospi and Hang Seng in the green as their closes loomed. The ASX added 0.6% while the Hang Seng put on 1.5%. Strong US corporate earnings continue to support regional equity, as does a broadly higher US Dollar. According to Thomson Reuters almost 60% of the 276 S&P 500 companies to have reported so far have beaten expectations, with first quarter earnings up a chunky 24.6% on the year. So far investors seem content to ignore the prognoses of some companies that the rest of the year will see gains harder won.

There wasn’t a lot of economic data around as a new week kicked off. China’s official Purchasing Managers Indexes were generally higher than expected. The Australian Dollar can react to these releases but didn’t move far in the event. Indeed it still looks heavily weighed down by its deteriorating interest-rate differential with the US Dollar. The greenback slipped a little against a basket of its most heavily traded rivals as US Treasury yields slipped back too. However, it remains well-supported, and made gains against both the Australian and New Zealand Dollars Monday.

USD/JPY is showing some tentative signs of topping out, but may simply have settled into narrow range trading before the Federal Reserve’s monetary policy announcement later this week. 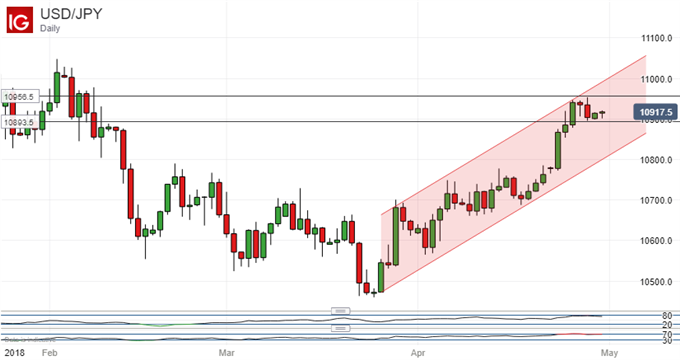 Gold prices were steady but crude oil prices slipped back on news of more operational US rigs, presaging higher supply.

Still to come Monday are German Consumer Price Index data for March, along with US personal spending numbers, the Chicago PMI and pending home sales figures.