- The ECB kept rates on hold as its QE taper continues through September 2018, while making no – absolutely zero – changes from its policy statement last month.

- In the copy-and-paste policy statement, the ECB reiterated that rates will remain low past the termination of its QE program.

- EUR/USD trades slightly lower ahead of what is expected to be a dovish press conference by ECB President Mario Draghi (8:30 EDT/12:30 GMT).

The European Central Bank surprised no one today when they kept their main overnight rate (0.00%), marginal lending facility rate (0.25%), and deposit facility rate (-0.40%) on hold. In fact, heading into the meeting today, there was less than a 5% chance of a rate move being priced-in by markets, and overnight index swaps were pricing in less than a 25% chance of a rate hike by the end of 2018.

Similarly, the ECB proved so content with its current trajectory of monetary policy that it make absolutely zero changes to its April policy statement relative to the one released in March. It should not be a surprise, however, given that the ECB is one of the major central banks (like the Federal Reserve or the Bank of England) that chooses to only move (if it moves at all) when it has a new set of economic forecasts in hand (in the ECB’s case, the Staff Economic Projections).

The next time the ECB releases a new set of Staff Economic Projections will be in June; like the Fed, new forecasts are released in March, June, September, and December each year.

Accordingly, the key phrase in the policy statement that is drawing traders’ attention this morning, as was the case after the March rate decision, was that “The Governing Council expects the key ECB interest rates to remain at their present levels for an extended period of time, and well past the horizon of the net asset purchases.”

With the ECB’s QE program running at €30 billion per month until September, and another stepdown in asset purchases anticipated, rates markets are not currently pricing in a change until the second half of 2019 at the earliest. 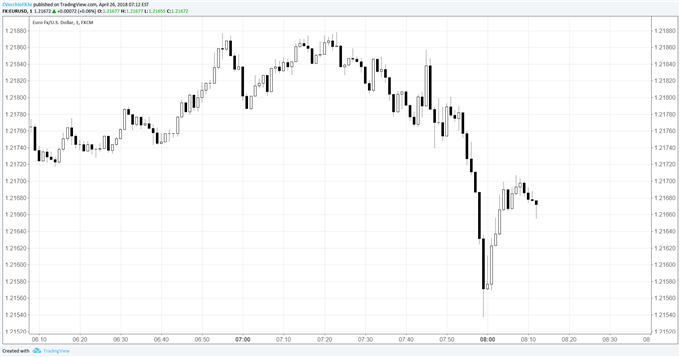 Immediately following the rate decision, EUR/USD proved stable at first, trading within 10-pips of its pre-release level of 1.2179. However, once the policy statement was released and the desire to keep rates on hold for an extended period of time was reiterated – drawing further distinction between the ECB’s dovishness and the Fed’s hawkishness – the Euro began to drop. EUR/USD hit a low of 1.2154 earlier, and has rebounded to 1.2167 at the time this note was written.