- After trading in the early $700s at the start of the week, ETH may soon be trading with a five-handle.

Ether’s recent rally from this year low around $360 came to an abrupt halt on Wednesday with the token losing nearly 20% on the day before recovering slightly. The fall broke a run of 16 higher lows in a row and may signal further falls back to the February 6 swing low of $568 if the 200-day moving average around $586 is broken. Ether’s sell-off came after former CFTC regulator Gary Genser questioned whether Ether, and Ripple, should be classified as securities, a situation that would put cryptocurrency exchanges under pressure to potentially de-list the tokens or fall under regulatory scrutiny.

Confidence in the cryptocurrency space was also hit Wednesday when MyEtherWallet, a web based wallet used for storing Ether, confirmed that it had been hit by a DNS spoofing attack that redirected site traffic to a phishing site.

Wednesday’s sell-off in ETH was part of a wider bearish move in the cryptocurrency market that clipped $40 billion of its market capitalization, currently standing at $395 billion. In the last 24-hours Ether’s turnover has reached $3.6 billion with around 30% denominated in either US dollars or Tether (USDT).

We discuss a range of cryptocurrency charts and price set-ups at our Weekly Cryptocurrency Webinar on Wednesdays at 12:00. 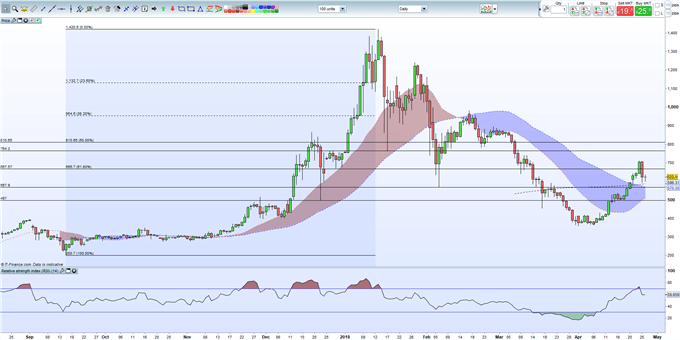 If you are interested in trading Bitcoin, Bitcoin Cash or Ether, Litecoin or Ripple check out our Introduction to Bitcoin Trading Guide to help you get started.

What’s your opinion on Ether – short-term pullback or bearish correction? Share your thoughts and ideas with us using the comments section at the end of the article or you can contact me on Twitter @nickcawley1 or via email at nicholas.cawley@ig.com.