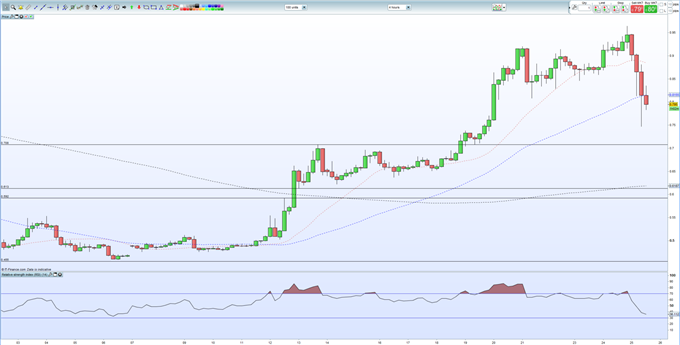 IG Client Sentimentshows 96.0% of traders are net-long Ripple with the ratio of traders long to short at 23.83 to 1. In fact, traders have remained net-long since Dec 25 when Ripple traded near $2.49; price has moved 68.7% lower since then. Download the guide to see why changes in client holdings matter.

After doubling in April – from $0.45 to $0.96 –Ripple met heavy sellers in the last 24 hours and slumped back down to a low around $0.74, painting an ominous technical picture. The sell-off was predicated on media reports that Gary Gensler, the former chairman of the CFTC, suggested that XRP may be classified as a security and that regulators need to bring some clarity to the situation. Although not a new situation – Ripple have previously denied that XRP is a security – the news story hit Ripple hard, highlighting the fragile nature of the recent rally. And with retail customers very heavily long of XRP (See IG Client Sentiment above), further sell-offs may become self-fulfilling as retail jetison the crypto-token.

We will be discussing a range of cryptocurrency charts and price set-ups at our Weekly Cryptocurrency Webinar on Thursday at 10:30am.

If you are interested in trading Bitcoin, Bitcoin Cash, Ethereum, Litecoin or Ripple we have an Introduction to Bitcoin Trading Guide along with a Free Demo Account to help you get started.

What’s your opinion on Ripple – bullish or bearish? Share your thoughts and ideas with us using the comments section at the end of the article or you can contact me on Twitter @nickcawley1 or via email at nicholas.cawley@ig.com.